As the country debates the fate of Confederate monuments, a local push to rename Fort George Wright Drive is heating up again 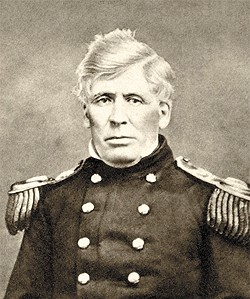 Not the location, to be clear. The address itself, specifically the street name: Fort George Wright Drive.

"Those institutions who are on that road have to literally put it on our envelopes every day," Eklof says.

Eklof's church sits on land that was once Fort George Wright, named after Col. George Wright, one of the most controversial figures in Spokane's history.

Two years ago, after the Charleston, South Carolina, church massacre sparked a national debate over the Confederate flag, Eklof and several others sent letters to the Spokane City Council, urging them to rename the street named after Wright. The effort convinced the city council to add the name change proposal to the plan commission's agenda.

Two years later, Fort George Wright Drive remains. And now, as the controversy over the Robert E. Lee statue in Charlottesville, Virginia, has raised questions again about glorifying the Confederacy, Eklof wants to restart the debate over Spokane's own grim history.

"It's time to renew my personal push to get the name changed," Eklof says. "It's an important part of our society to say we're not going to stand for these symbols."

"Put your faith in me and trust to my mercy," Col. George Wright implored the local Indian tribes, according to Donald Cutler's "Hang Them All": George Wright and the Plateau Indian War.

It was a ruse. Wright was a man of faith — deeply religious, Cutler says — but he wasn't a man of mercy. In May of 1858, Lt. Col. Edward Steptoe, intending to investigate the murder of two prospectors, ignited a 10-hour-long battle with local Indian tribes, barely escaping with his life. Wright rode in, seeking retribution and to "bring those Indians under subjugation."

Wright's men burned storehouses of wheat, razed grain fields and eliminated root caches. The decision to slaughter hundreds of the tribe's horses disturbed even his own men.

"To see 700 beautiful mares, colts and horses in one slaughter pen was truly awful," one soldier wrote.

Rounds after rounds of hostages were taken, some under the pretense of a truce. Prisoners were hanged — 17 in all. In one incident, there were six prisoners, marked for execution after only a cursory round of questions, but only three nooses. So three had to wait, watching the other three being executed. Wright issued threats — if hostilities didn't cease he would return and "annihilate the whole nation" — with hanged warriors swaying behind him.

Through an interpreter, he told them they all deserved execution, and threatened to "hang them all, men, women and children."

Over the years, plenty of observers excused Wright's actions as necessary, even laudatory.

"The hangings marked the end of the Indian wars and brought a permanent peace and a feeling of safety to the whites of this territory for the first time," Silas Cook, a resident urging Spokane to change the name "Latah Creek" back to "Hangman Creek," told the Spokane Daily Chronicle in 1934.

But Cutler's interpretation is clear.

"He knew what he was doing was the essence of terrorism," Cutler says. "He knew he was inflicting cruelty for the sake of cruelty."

Today, Wright's name is synonymous with infamy for many local American Indians.

"He was the bad guy for sure," said Barry Moses, a Spokane Tribe member who translates textbooks for the Kalispel Tribe. "He came into the Spokane country, really as an aggressor or as a conqueror."

Moses doesn't want to generalize — not every American Indian, of course, cares about how George Wright is remembered. But he cares. He thinks about how some argue that all this stuff should be brushed off, and that everyone should just get past it and "be Americans."

"I see something like Fort George Wright Drive," Moses says. "Am I supposed to celebrate, then, the conquering and the destruction and the defeat of my own people? Is that what it takes for me to blend in and be an American?"

The controversy over Fort George Wright Drive isn't a new one, of course. North Central High School students objected to the name in 1987. And in 1993 and 1994, the Peace and Justice Action League and a group of Spokane Falls Community College students attempted to rouse support for changing the street name in front of the college.

But most SFCC faculty members opposed a change, with some arguing that it was an attempt to judge the past by modern values.

Recently, however, Spokane has seen a spate of name changes. City Council President Ben Stuckart rejected a 2014 proposal to name a new City Hall plaza after Spokane city founder James Glover, after concerns were raised about how Glover treated his wife.

Instead, city council voted to name the plaza the Spokane Tribal Gathering Place. Last year, over objections from some Italian Americans, the council changed the city's recognition of Columbus Day to "Indigenous Peoples' Day," noting Columbus' legacy of slavery and brutality.

But renaming a street requires going through the Plan Commission, Stuckart says. Since other councilmembers ranked the name change as a low priority, it's been gathering dust on the commission's agenda. Stuckart says he's willing to push for the name change again, but only if he hears from constituents who desire it.

"Changing the holiday didn't require a process through the municipal code," Stuckart says. "It was easier for it to get done."

City Councilman Mike Fagan points to a printout on the table, a list of local street names and their controversial history. For Fagan, the council's lone sole conservative, the biggest objection to changing Fort George Wright Drive is a simple question: Where do you draw the line?

"There's a lot of history in the city of Spokane, with regard to our streets and our bridges, that in today's political environment wouldn't be considered politically correct," Fagan says.

Fagan doesn't even mention Stevens Street and Stevens County, both named after Isaac Stevens, the first governor of Washington Territory, who imposed martial law and forced tribes to sign treaties at gunpoint.

Fagan argues for keeping it all, even the statue of Lenin in Seattle or of Planned Parenthood's founder in the Smithsonian: "It's hard to say what people in the past had in their hearts and minds when these decisions were made. If you erase or alter our history, you're doomed to repeat it."

But Moses says it's useful to consider why a figure is being celebrated. Jefferson owned slaves, but is celebrated for his other contributions, like authoring the Declaration of Independence. But Wright?

"What are we celebrating about him? That he came in and destroyed a nation of people to advance a superiority of another race?" Moses says. "We don't put up a monument of George Wright because he was a good father or a loving husband."

To Moses, renaming Fort George Wright Drive is not about erasing history. It's about acknowledging the truth of it. In 1997 and 1999, there was a debate over renaming "Hangman Creek" once again, back to Latah Creek. But in that case, Moses recalls that the Spokane Tribe, at least, overwhelmingly wanted to keep the name, as a way of remembering a war crime.

"We have to recognize that the atrocities were long ago, but there are still communities who are living the effects of those atrocities," Moses says. There is still overwhelming poverty on many Indian reservations, he notes.

That's something Eklof also keeps in mind. Changing names is not enough, he says: "If all we do is change names and tear down monuments, it's going to harm the situation, not help it."♦