You (sort of) Know this Guy

Comedian Bob Saget revels in both family and filth 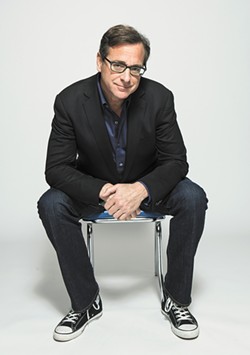 At this point in Bob Saget's career, it's not surprising to anyone

that one of modern television's cuddliest dads is also, on occasion, one of stand-up comedy's most hilariously filthy performers.

Anyone under the illusion that Saget and his Danny Tanner persona from Full House (and now Fuller House) were one and the same should have learned that wasn't the case via his roles in Half-Baked or Entourage, by reading his best-selling memoir or through watching one of his stand-up specials.

"No one is shocked anymore, because they know my intentions could not be more pure," Saget says via phone from California. "I'm not here to talk about politics or religion. I just do what I think is funny. I'll write something down, or I'll tweet 'Here's something about my penis you might not know.' It's just silly. What 60-year-old writes penis jokes and then sends them out to his 20-year-old fans?"

Well, Saget, for one, but it's clear in conversation that there's a lot more to him than the either/or proposition of "sitcom dad" or "dirty comedian." He's unfailingly polite and thoughtful in conversation about his comedy and career. And yes, he's incredibly nice as he talks about his passion for directing films, a recent role as a Lutheran pastor in Hand to God on Broadway or an upcoming trip to New York to raise money to research scleroderma, the disease that took the life of one of his sisters.

While Saget's career has taken him through myriad projects as a writer, actor, director and host, stand-up comedy has been what Saget calls "the center of the wheel" since he won a radio station contest as a Pennsylvania 17-year-old with a song he wrote about bondage. That taste of making people laugh inspired him to lug his guitar to New York and perform at open mics before heading to Los Angeles and working at The Comedy Store, where he introduced and shared stages with legendary performers like David Letterman, Richard Pryor and Robin Williams. "It was ridiculous," Saget says of the post-Steve Martin era when suddenly, comedians were held in the same regard as rock stars.

Directing films and TV, Saget says, is something he loves, and "similar in a way to stand-up in that you have control, to a certain point. The creative choices and collaboration [in directing] is what I love so much, whereas in stand-up I love the freedom and the ability to entertain a crowd all by yourself. Although my audiences tend to get involved so much that they start entertaining themselves."

While Saget typically performs in large theaters, he's coming to Spokane for the first time for club shows to help hone a new hour he's been working on. It's a rare opportunity in a December that has him bouncing between appearances in Toronto, New York City and Tokyo, thanks to his charitable work and the release of season two of Fuller House on Netflix, before heading home to California for the holidays with his daughters and girlfriend.

While Saget's stand-up is typically fairly "free-form," he says the new material has "a little more structure," something he thinks might be inspired by his time on the Broadway stage. Even if that's true, he says, the laughs will come through.

"Whatever atmosphere I'm in, I'm a chameleon to it. The club atmosphere, I love the intimacy of it," Saget says, noting that the new material lends itself to smaller rooms. "This hour seems a little more personal. It's still chock-full of immature humor, because basically I've figured out through a lot of therapy that the silliness I use is a diversion from pain. But I'm just very happy with my stand-up right now." ♦