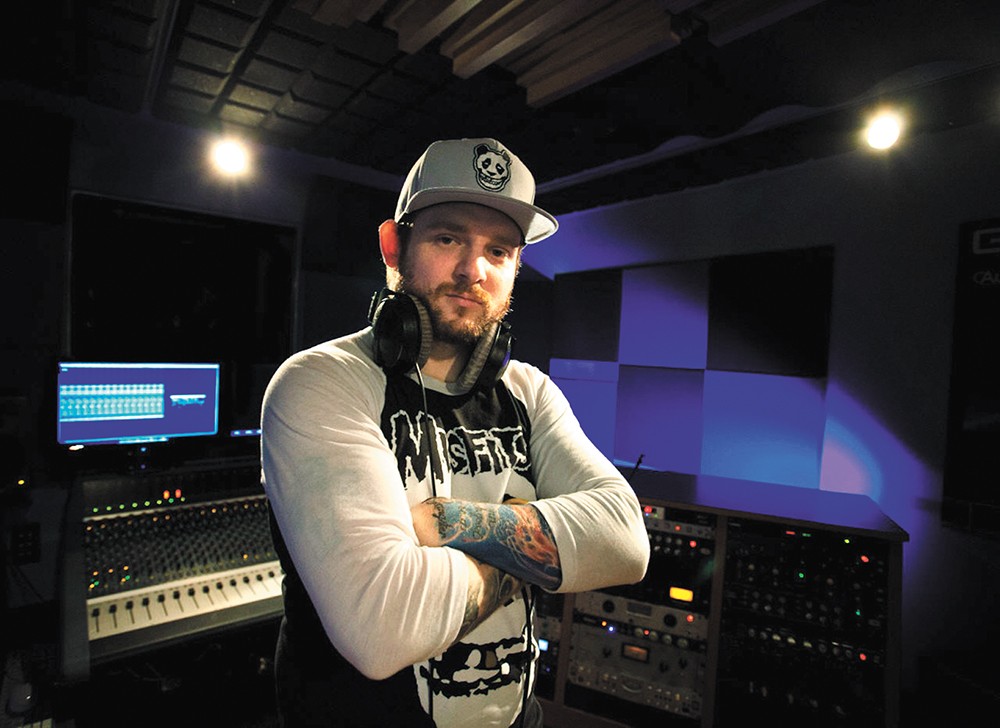 If you go to YouTube and search for "Astounding Rapper Mac Lethal,"

Watch the clip. First, Ellen shows Lethal's viral video hit from earlier that year, "Alphabet Insanity." Then she introduces the Kansas City MC. Lethal walks out with a bemused grin, hugs the queen of daytime TV and shakes hands with guest Jason Bateman. A stagehand brings him a mug of something to sip from nervously, just in case he needs something to sip from nervously.

But nerves don't come easy to Mac Lethal, who looks at the audience, thrusts two fists in the air, and yells out, "LOOK WHERE I AM RIGHT NOW!"

That's it, right there. That must be the moment when Lethal — a white underground rapper from a Midwestern town known in hip-hop circles for Tech N9ne and nothing else — realized that his unique ability to rap ridiculously fast might just be enough to take him further than he ever could've imagined.

The thing is, you don't see too many Rhymesayers Entertainment recording artists or Scribble Jam rap battle champs on Ellen.

The Internet can do amazing things.

Sorted by publication date (oldest to newest), Lethal's YouTube channel tells a story about the intersection of creativity, technology and hustle (and probably boredom). At the top — posted seven, eight, nine years ago — are a number of straightforward videos set to rap songs, plus a few funny experiments, like a Miley Cyrus remix and a rap that summarizes the film Dazed and Confused. Most of them have a few hundred thousand views; a few break into the millions.

Then in late 2011, Lethal posted a video called "Nerdy White Kid KILLS 'Look at Me Now' (Pancake Rap)." It features him standing at a stove, cooking pancakes and rapping at top speed over a beat from a Chris Brown hit.

It went viral overnight and now stands at 38 million views.

After that success, Lethal's channel diversifies to include drunken rants, comedy bits, celebrity interviews and fast raps about Chick-fil-A and basketball shorts. One video is called "Dude Remakes a Kanye West Song with Hair Products. Then KILLS It." Tucked in there somewhere is the alphabet rap that caught Ellen's eye. It has 16 million views.

There's "Rapping with Only Z Words," "Rapping for 90 Seconds Straight ... Without Breathing," and "Rapping After Eating a Carolina Reaper Pepper." And, posted nine months ago, "27 Styles of Rapping," which finds Lethal blazing through several hip-hop styles (old school, G-Funk, hyphy and crunk among them) and impressions of famous artists like Eminem (he nails it) and Drake (not so much).

As of earlier this week, Lethal has amassed nearly 143 million views and more than 1.2 million subscribers on YouTube, and he has spawned his own army of reaction videos (in which people watch him rap and make comments, basically). And if this is all a little too "new media" for you, keep in mind that Lethal published a book, Texts from Bennett, in 2013, and he parlayed this stardom into a TV gig (he hosts Binge Thinking on MTV2).

If it sounds like Lethal has conquered the 21st-century music game, think again. Elsewhere on his channel, there's a 40-minute recording of Lethal talking about his Ellen experience. "Of all the things in my career that have proven to be difficult, YouTube is probably one of the most difficult," he says, comparing his statistics to some of the platform's giants. "Remaining relevant and hot on YouTube is a really difficult thing."

That's no doubt true. But if you listen to the entire clip, you get a clear sense for Lethal's comic timing, his thoughtfulness, his brash streak and his natural ability as a storyteller. It's those qualities — not rapping after eating a hot pepper or whatever — that have fueled one of the most interesting careers in underground rap over the past 20 years, and will continue to do so whether or not Mac Lethal ever goes viral again. ♦