The sound of the solar system 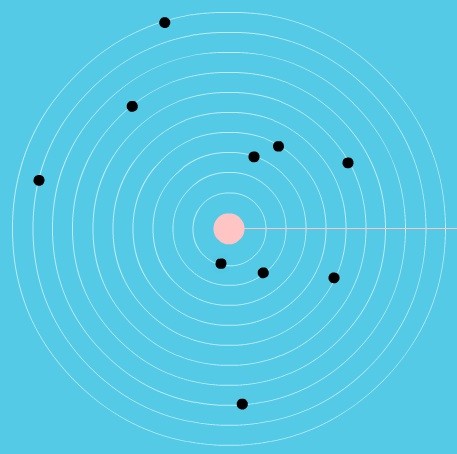 British design firm Whitevinyl has created — don't know why, or for whom — an awesome aural representation of our solar system that is currently the coolest thing I have ever seen/heard.

The simple Flash animation (click the pic to go see it) gives each of our ten planets (who's ever heard of Ceres?) a musical tone, then sets them spinning like a solar player piano. Drag the tempo slider to about halfway and listen to Mercury drone in F as it whirs around the planet. Venus, a little further out, provides a kind of quarter note as it passes that horizontal axis. Third in line, Earth throws in an atempo A.

These inner planets create a kind of hypnotic hum that's relieved and punctuated by the more periodic tones of the middle planets. Sometimes it's chaos. Other times, you get a surprising, musical, chromatic line, as they pass side by side.

And it's immensely satisfying, in an admittedly strange way, when Pluto finally makes its long trek around the globe — pinging out a high C before resuming its slow voyage.