On shelves now! (and some books that aren't)

Tears of a Clown: Glenn Beck and the Tea Bagging of America, by Dana Milbank (Doubleday, Oct. 5)
If he cries, his fears must be real. And anyone who disagrees with him is no patriot. Milbank calls his reporting "fair and balanced" — but then so does Fox News. Irony, anyone?
click to enlarge 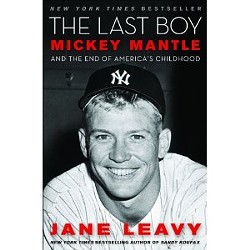 The Last Boy: Mickey Mantle and the End of America's Childhood, by Jane Leavy (Harper, 480 pages, Oct. 12)
Sexual abuse, exaggerated expectations, injury, crudeness, honesty, alcoholism — Leavy, a big fan of the Mick, gets the facts right and avoids hagiography. It's as much about loss of innocence, tricks of memory, and hero worship as much as it is a biography.
And Furthermore, by Judi Dench (Weidenfeld & Nicolson, Oct. 14)
From those British comedies shown on PBS through Shakespeare in Love, Notes on a Scandal and all the James Bond films.
Ratification: The People Debate the Constituion, 1787-88, by Pauline Maier (Simon & Schuster, Oct. 19)
Strict constructionists may be surprised by how many people wanted to explode the whole process back when they were strictly constructing our national code of laws. Lots of folks whinged about taxes and centralized government and not enough states' rights. So they torched copies of that gol-darned (proposed) "Constitution." (Wait, this is set in 2010, right?)
Stones into Schools: Promoting Peace with Books, Not Bombs, in Afghanistan and Pakistan, by Greg Mortenson  (Viking, paperback, Oct. 26; originally published Dec. 2009)
The sequel to Three Cups of Tea (2008). It's not just about building schools and making nice — Mortensen shows how to walk the political tightrope among governments, rebel armies and occupying soldiers. Educating girls, who then educate their mothers, is a key step in preventing the sons of those mothers from joining the Taliban. Required reading for WSU first-years.
Keith Richard’s memoir, Life (Little, Brown; Oct. 26)
We're surprised he can remember any of it.
The Mind's Eye, by Oliver Sacks (Knopf, 290 pages, Oct. 26)
Another philosophical investigation of cases that are unusual even for abnormal psychology: people who can't recognize faces, or see 3D space (but then suddenly acquire that ability), or lose the ability to read or speak or see on both sides.
click to enlarge

Cleopatra: A Life, by Stacy Schiff (Little, Brown; Nov. 1)
She was Greek. She chose her lovers very carefully. She taught herself Egyptian. She was enormously, unbelievably wealthy. She had no qualms about having people killed. She had a hooked nose. (And Schiff won a Pulitzer 10 years ago for her biography of Vera Nabokov, wife of Vladimir.)
Lord of Misrule, by Jaimy Gordon (McPherson, Nov. 15)
A novel about life at a run-down horse racing track in West Virginia: owners, trainers, blacksmiths, stall workers, girlfriends. Nominated for a National Book Award.

This week in Lunches & Punches