... along with some current releases. Books to read, books to buy and give as gifts, books to know about to reinforce your cocktail-party chatter: 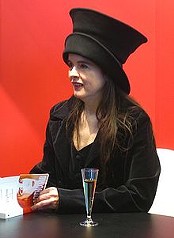 Hygiene and the Assassin, by Amelie Nothomb (translated from the French; Europa/Penguin, 170 pages, Oct. 26)
A bitter and rude racist and sexist is dying. Good riddance, you might say. But this guy won the Nobel Prize, so journalists line up for an interview. The first four are scandalized by the old man — but the fifth stands up to him. And her research has uncovered his inmost secrets. (Nothomb, who's Belgian and wears wild hats, is 43 now; she wrote Hygiene when she was 25.)

The Killing of Crazy Horse, by Thomas Powers (Knopf, 600 pages, Nov. 2)
A year after the Little Big Horn, the Lakota warrior had surrendered in Nebraska; he died of a bayonet wound (accidental? deliberate?) while he was in the custody of the U.S. Army.

Too Much Happiness, by Alice Munro (Vintage, 320 pages, Nov. 2)
The paperback reprint of last year's universally praised collection of 10 short stories by the Canadian master writer — filled with cruel children, a grieving mother, a 19th-century mathematician who was female.

Moonlight Mile, by Dennis Lehane (William Morrow, 330 pages, Nov. 2)
You know the little girl who got kidnapped in Gone Baby Gone? She's 16 now. And she's missing again. And the same two Boston detectives (now married, with a daughter of their own) are going to investigate. Again.

The Passages of H.M.: A Novel of Herman Melville, by Jay Parini (Doubleday, 460 pages, Nov. 2)
Lizzie has been married to the author of Moby Dick for 20 years. He's a bit distant; bipolar; and always daydreaming about his days sailing the high seas and hanging out with cannibals. Dickens and Hawthorne make brief appearances in Parini's biography/novel. A good book for the English major on your holiday gift list? ---

Revolution 1989: The Fall of the Soviet Union, by Victor Sebestyen (Vintage, 500 pages, Nov. 2)
In just one year, six Eastern Bloc nations had declared independence. Ironically, the KGB tried to speed up the process — and the CIA tried to slow it down. Written by a reporter who was there.

Blur: How to Know What's True in the Age of Information Overload, by Bill Kovach and Tom Rosenstiel (Bloomsbury, 240 pages, Nov. 9)
Wikipedia and most websites are not evil in themselves. We're not lacking in information — we're drowning in it. What we're lacking is critical thinking. Using what they call the "way of skeptical knowing," Kovach and Rosenstiel set forth a systematic set of questions that will help Web surfers stop taking everything at face value. Their advice: Scrutinize evidence. Verify sources. Always ask, "How do they know that?" Figure out if information is partial or complete. So ... are you gonna learn something -- which usually involves loss (the giving up of something that you thought you knew) — or are you just gonna keep visiting the same websites unquestioningly and so remain stuck in your own preconceptions?

The Emperor of All Maladies: A Biography of Cancer, by Siddhartha Mukherjee (Scribner, 600 pages, Nov. 16)
Mukherjee is an oncologist at Columbia and has a doctorate from Oxford in cancer studies, so he knows whereof he speaks: the initial excitement over chemotherapy, followed by a more-is-better approach — leading to thousands of sickened and maimed patients. Cancer is king, he writes, because it's so wily, multi-formed, adaptive. (Imagine everyone in the state of Washington dropping dead — that's how many people will die, worldwide, from cancer this year. That's what we're up against.)

FOUR HOURS UNTIL GO TIME: Where to drop off your ballot