Spring! (is in their step) Plus, reader photos

It was quiet out on the city streets this morning. Too quiet.

I live across the street from an elementary school and mornings are usually a crazy snarl of cars jockeying and jostling for a slot at curbside, much like hockey players going hard to the boards. Then the buses come and give their horns an angry blast.

Today. Muffled silence. Nine inches of wind-smoothed fresh powder piled up everywhere. I hear the mayor has eyes and spies everywhere, so I break out the shovel and get to work on the long sidewalk. Even though the jail is filled to critical, they will make room for lazy, cynical scofflaws who don't promptly clear their sidewalks. (And don't put it in the streets!) Damn the stern overlords who run this city.

So I'm sweating away and see two kids trudging towards the school. I mean trudging. Weight of their enormous backpacks bending them earthwards, heads down.

The two kids, brothers I'd guess, stand tall. Their backs straighten. Heads swing up. And they spin round and prance — skip and prance — on the way back home.

It's winter on the streets, bro. But there is spring in their steps.

Here are some pics that users have sent in, of their own snow experiences in the last 24 hours. 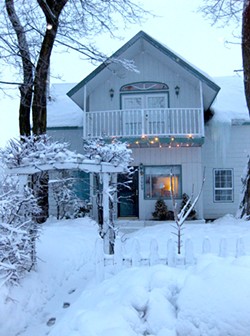 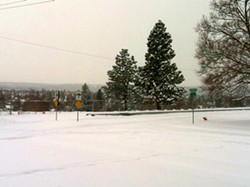