Mullan, Idaho, made national news last week when a section of the Lucky Friday silver mine caved in, stranding a miner and member of the Mullan community, Larry Marek. While signs of Marek have yet to be found, community and mining company efforts still continue vigorously.

I ventured through the Silver Valley to Mullan yesterday not in search of hard-hitting news but to search for signs of hope.

Signs posted at Mullan city limits report a population of only 840, and like many small towns, the people here are private and self-reliant. While the town's mining history runs deep, that's not the only thing that makes the place special. Residents of Mullan, it seems, have invested their mining dollars in a community center, bowling alley, indoor swimming pool and gymnasium, and made it their own. It's a source of pride and a place for community.

Like most small towns (and big cities for that matter too), there are favorite bars, daily routines, sign of progress, and also signs of despair. Residents of Mullan seem to love their town. It's not a place where people end up but a place where many have chosen to be.

I tried to tread lightly with my camera this week. When people have something they cherish, the instinct to protect it is fierce. My heart truly goes out to the family of Mr. Marek and to the entire community of Mullan.

Situated just a quarter-mile off 1-90, which runs through the panhandle of North Idaho, Mullan sees its fair share of travelers passing through each year. While most keep going, a few stay.

A signature M stands watch from the hillside over Mullan.

The Coyote Cafe is famous for serving guests good food, and more than they can eat. Despite the Grinch picture hanging above the line, Head Chef Michael (a Gonzaga alum and transplant to Mullan) is anything but grouchy.
---

Talon Rupp Conners rides his bike through downtown Mullan. He and his mom, Melissa, moved here shortly after Talon's father passed away. Melissa, a social worker, says the community — with its pool, the playground and all the things they do for families — is really good for children.

Reasonable housing prices made it possible for Mike, a boilermaker from Colorado, to buy a fixer-upper on Finn Gulch just two years back. Mike spent most of his youth surfing throughout California, Baja Mexico, and Central America. He now calls Mullan his home.

With a graduate degree in social work, Jeff is a grant-writer who works from home. As a former boilermaker and somewhat eccentric jack-of-all-trades, he's traveled extensively throughout the world but says the natural environment and slow pace of life in Mullan make the town special.

Some describe Mullan as a town that takes care of itself. Its fire department is staffed exclusively by volunteers. It's also home to one of the best mine rescue teams in the nation, and community members travel yearly to participate in competitions.

The Outlaw Tavern is a popular local bar in Mullan that serves what's rumored to be Idaho's best burger.

Eric was born and raised in Mullan. He visits his family and friends there when he needs a break to get grounded. As a graduate of the University of Idaho, he worked four years in mining before moving to Missoula to play professional poker full-time, and while he has no desire to return to the mines, he says he'd rather work underground than live in Spokane. 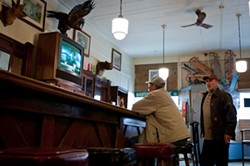 Mullan may appear slow by day, but locals are quick to pick up the pace by gathering for happy hour at one of the town's three bars.

Originally from Maryland, Drew moved to Mullan four years ago and worked as a traveling phone book salesman. He recently took a job at the newly opened Silver Dollar Bar and is excited about working just three blocks from his home. He loves the mountains, the snow, and everything about life in a small town.

ABOUT WANDERLUST: This photo series is a 60-day visual story-telling project that explores the seemingly ordinary places, people and things we experience everyday. It's about being curious and asking questions. It's about wanting to know more about the world around you and seeing it from fresh perspectives. If you have ideas on where I should wander, drop me a line: amyh@inlander.com.

MORNING HEADLINES: Drones over Libya, torture in Spokane and BONUS LINK! torture your eyes at naked gym. It's Friday!