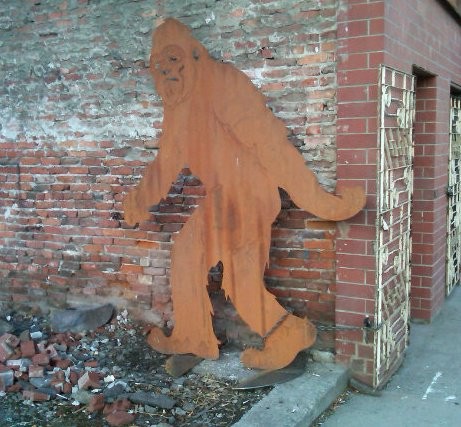 Joy Arch is hoping for a Bigfoot sighting, and she’s willing to pay $100 for it.That is, if it leads to the return of Biggie, the 8-foot-tall, 300-pound steel Bigfoot statue stolen from outside her antique store, Roost, on Tuesday morning.

A regular customer and family friend saw the statue on his daily 4 am walk Tuesday, but it was gone when Arch arrived to open the store at 10 am.

In the empty lot on the corner of Main and Division, under a towering Holiday Inn Express billboard, all that remains are a few pieces of broken chain that used to hold Biggie to the brick wall.

Arch says the thieves must have used a large truck to pull the statue from the 3-inch bolts holding it to the ground and haul it away.

“A lot of thought went into this — the timing, the manpower, how to get it out,” she says. “Somebody wanted him really bad, but I want him back worse.”

Arch’s husband, Matt, a metal fabricator by trade, made a handful of the sculptures last summer and sold all but the one mounted outside the store. Arch valued each at about $800.

The Bigfoot has been outside the store since it opened about a year ago, and has become a mascot for the business, drawing customers to the store and tourists to a photo op, Arch says.

Arch says she doesn’t know who might have taken Biggie, but her only guesses are Spokane Community College students (the school’s mascot is a Bigfoot) or late-night drunks downtown.

Arch reported the crime to the Spokane Police Department but says there’s not much they can do. She expects the thieves will have trouble concealing the massive statue and, because of that, she hopes it will turn up soon, she says.

Matt Arch can’t make another Bigfoot because he sold his equipment last fall, and Joy says they don’t plan to replace Biggie with anything if he’s not found.

“Nothing could really replace him,” she says. “There’s nothing quite as unique.”

Mayer Hawthorne at the Knitting Factory tonight (and it's free!)