ELECTION 2011: Stuckart speaks; and the possibility of recounts 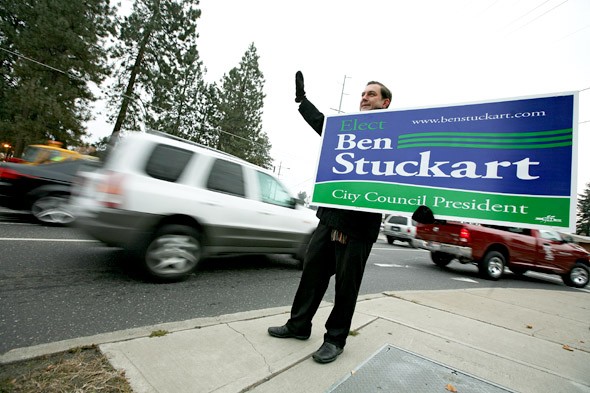 With two days of vote counting behind us, and with a majority of the ballots tallied, Ben Stuckart's lead in the race to become Spokane City Council president has just gotten bigger.

He now has almost 3,000 more votes than former Mayor Dennis Hession, who has yet to concede the race.

And though there are many theories about why voters marked their ballots the way they did — everything from a throw-the-bums-out mentality to the more nihilistic complete rejection of the political system — Stuckart says he interprets it in one simple way.

"This election is a lesson that retail politics works," he says. "Where I won big margins is where I doorbelled.Where I personally doorbelled I did better than where my volunteers doorbelled."

The clearest indication of this "retail politics" is in the precincts won by Councilman Steve Corker in the primary. In that race, Hession won the day with 37 percent of the vote. Stuckart was second with 30 percent of the vote, and Corker third with 27 percent.

In this week's general election, Stuckart took 29 of the 33 precincts won by Corker in the primary. But it wasn't the endorsement that did it for Stuckart, he says.

The map above shows voting precincts won by Ben Stuckart in purple and those won by Dennis Hession in green. Darker-shaded precincts are those that were won by Steve Corker in the primary election.

"The Corker endorsement was good, but it wasn't well publicized," he says. "It was all doorbelling."

He points to the other candidates that worked the streets — Mayor-elect David Condon and Steve Salvatori — and their success at the ballot box.

"Some of the incumbents thought they didn't have to doorbell because of their name recognition," he says. "We would have seen a different result if people had worked harder."

And work hard he did: "I lost 27 pounds since the beginning of the campaign."

Come January, when he takes over as head of the council, he'll likely need to continue working hard. As a progressive, he'll be working with a conservative mayor and a council that could be predominantly conservative. (The race between Councilman Richard Rush and Mike Allen is still too close to call, and will determine the majority bloc.)

He's already started to lay the groundwork for his relationships on the council.

"I had a long conversation with Steve Salvatori today. I've talked with Jon [Snyder]," he says, adding that he spoke briefly with Condon when the vote first came in. "Nancy [McLaughlin] sent me a nice text on election night [and] I had two hour-long conversations with Nancy during the campaign. ... I'm a pragmatic person. I'm not about drawing a line in the sand.  If you work hard, you can really get a lot done. You can bring people together."

But what about the press, which hasn't had the closest relationship with the man Stuckart is replacing, Joe Shogan?

"In February, we're going to start monthly forums, q-and-a with the press and the public," he says. "If anybody wants to join me, they can. Otherwise it'll be Ben by himself."

In other election news, there are two races in Spokane that are very close: the council race in District 2, and Prop 1. If they remain close, the chances of a recount increase.

Mike McLaughlin, manager of the Spokane County Election Office, says there is no automatic recount for initiatives. Currently, Prop. 1 is losing by 486 votes out of more than 44,000 votes. If anyone wants a recount, all they have to do is pay for it, says McLaughlin.

In the council race between incumbent Richard Rush and Mike Allen, it's a bit different. Anyone can also ask for a recount for the same price. But if the vote is within one-half of one percent, an automatic recount is triggered.

For that to happen right now, the two would have to be within 78 votes. But currently, Allen is ahead by 206 votes.

McLaughlin expects his team to count another 20,000 ballots tonight.

"We should pretty much be wrapped up by next Tuesday," he says. But on her Facebook page today, Mayor Mary Verner said she hoped to have a decision tonight on whether she'll make an acceptance or concession speech.

For election results, maps and analysis, go to Inlander.com/election2011.

Hate Crimes: The Meaning of Matthew

How is Prop. 1 winning over so many voters who also voted for Mike Fagan?