If you've ever strolled down Riverside east of the Paulson Building and heard "Highway to the Danger Zone" roll across the sidewalks from a pair of how-can-they-even-be-legal speakers, then holy shit, you know the Revolver bar. The downtown location closed shop and is moving to a larger space at 221 N. Division, where it'll be nestled between Fast Eddies and Ugly Betties. Looks like they'll have expanded hours (noon to 2 am) rather than opening up around nightfall.

The good folks at Revolver haven't returned my Facebook queries about when they'll reopen.

Warren G’s debut album, Regulate…G Funk Era, sold more than three million copies and scored him a Grammy nomination in 1995 for its first track, “Regulate,” which he produced and performed with his musical cohort, Nate Dogg. Some people say that "Regulate" was a song that Def Jam Records, and had a massive influence on West Coast hip-hop. Read our story about the song here, and check out Warren G tonight in Moscow at John's Alley. (21)

Gleason Gras! featuring Hey! is for Horses, Luke Pate, Mishap, Blake Noble, Left Hand Smoke goes down tonight (and tomorrow — see below). Check out our story on hometown hero Steve Gleason and his battle with ALS here, and check out the show at the Saranac Public House, and surrounding stages, tonight. (All ages — check out ticketswest.com)

The Belltower : Emily Wells and Edmund Wayne (All ages)

Pigout in the Park: Nude Pop, Silver Treason, the Verve Pipe and others (All-ages)

Pigout in the Park: The Verve Pipe, Too Slim and the Taildraggers, Terrible Buttons, Folk Inception, the Yardbirds and more (All-ages)

CAT FRIDAY: Display your love of felines with these trendy tops

Thankfully avid cat lovers – when they choose it – have the anonymity of the Internet to hide behind when posting ridiculous amounts of cat-related photos, websites, and other kitty miscellany online. As a self-proclaimed cat lady (minus the stereotypical traits – frumpy clothes, antisocial, etc.), I have come to find that the Internet also is a literal gold mine for trendy and hip cat-themed fashion, and hence the start of my ever-growing collection of awesome cat shirts.

On Etsy, there seriously are TONS of shops selling American Apparel’s ever-popular tees and tanks with one-of-a-kind cat screen prints, making showcasing one’s love for the feline form both stylish and apparent to others, aside from the cat hair all over your clothes anyway.

For today’s Cat Friday post, I decided to share a few super awesome cat garb-selling Etsy shops and highlight some shirts I love. I’m just going to keep it mum as to which of these I actually own…

Who could argue over your apparent badass-ness when wearing this tank from Austin, Texas based shop, Burger and Friends? Check out their shop for some other cat-themed tees, sweatshirts, and tanks, as well as other hip and edgy gear.

Brooklyn Cat features lots of unique and artistic hand-painted cat tees and tanks, as well as other graphic prints that are all created by shop owner and artist Miri Shilo.

Spokane is known to be a Juggalo hotspot, so I had to share this cute and fluffy take on the hardcore rap group Insane Clown Posse. I wonder how many of these shirts we could spot around town after a few weeks?

If you want to be super-obvious and blunt about your love for fluffy, wide-eyed, tottering kittens, check out RabbitandEye, which features a treasure trove of cat-themed graphic tees, tanks, skirts, and more. The shop also often features cool vintage items and edgy designs. 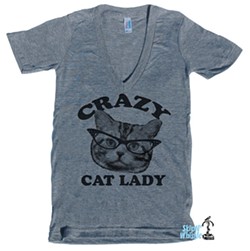 This cat-lady tee says it all. Check out Skipnwhistle for more colors and cuts of this tee and other great designs.

One of my personal favorite to-go shops for hip cat apparel is UnknownArtistApparel. Even if you don't like cats or are too timid to don a blatant tee, this Venice Beach-based shop has a lot of other great vintage screen prints.

If you're one of the extremely hard-to-find cat loving men, this shirt from steppie is a great way to look fashionable yet not too dorky, and you'll no doubt have all the cat ladies clamoring for your attention.

What To Do This Labor Day Weekend

PIG OUT IN THE PARK

If there’s one weekend – aside from Thanksgiving – when it’s acceptable to stuff your belly so full you have to unbutton your pants when you sit down, this is it. Each Labor Day weekend for the past 32 years, food vendors, bands and tens of thousands of people have converged in Riverfront Park for this event that’s a hit for all five of the senses. More than 50 local food vendors will set up shop, serving everything from gyros to bacon-wrapped hot dogs and frozen cheesecake dipped in melted chocolate. Prepare your taste buds accordingly. Tonight, Silver Treason, Nude Pop, and Verve Pipe are playing. Saturday, you can catch The Yardbirds. Ending the weekend fun is Fishbone on Sunday. Who can’t pass up dinner and a show?

August is tapering off and the days are already getting shorter. Why not take advantage of what's left of our Northwest summer? Take a load off this Labor Day weekend with days of music and sun at the Kootenai County Fairgrounds. Hosting bands and performers from across the region, this music festival promises to show a diverse range of musicians and bring together people throughout the Inland community. Come see the Shivering Denizens, Flying Mammals, Letters from Traffic, the Terrible Buttons and many more. Tickets are $25 for each day, but totally worth it. For line-up, visit the Coeur d'Alene Music Festival page on Facebook!

If the back-to-school television ads, the cooler nights and the fact that this latest issue of The Inlander features a college preview haven't clued you in, fall is on its way. Up on Schweitzer Mountain, they like to usher in the autumn a little early with the annual Fall Fest over Labor Day Weekend. The event takes place in the resort's village and features a beer festival with more than 40 different microbrews from around the Northwest. There's also plenty of live music, including headlining performances by Seattle soul poppers Pickwick on Saturday, the power rockers Jerry Joseph Band on Sunday and the Oregon punk-turns-bluegrass Larry and His Flask on Monday.

Late July wasn't a good time for The Village Experience, an area nonprofit that gives at-risk youth a one-of-kind music experience. Some heartless thug(s) robbed The Village Café and Concert House while it was being remodeled, stealing $5,000 worth of instruments, tools and appliances.

This is why the group needs Spokane's help. On Friday, a benefit show is being held at Ugly Bettie's, featuring the sounds of Flying Spiders. Bands like Bandit Train and Jesi B. and the All Rites are donating their time, as well, to help The Village Experience.

If you're in the giving mood or just want to enjoy some good tunes (for just $5), make your way down to Ugly Bettie's tomorrow night at 8 pm.

Meanwhile, the GOP gathers to anoint its shaman (NYT)

Born in a class five hurricane

Our gondola got hot so we shut it down (KREM)

Taliban kill 17 in Afghanistan in series of attacks (WashPo)

The tale behind the indomitable Venus & Serena Williams (NYT)

There's a high chance that I am wrong here, but just in case you are the
woman I think you are, (I apologize ahead of time if this is a man) and
this is addressed to who I think it is, it's time for you to move on. You
two had your history and you ended that when you broke his heart. You
continued to torture him for the next 2, almost 3 years trying to "stay
friends" and then continue to sweet talk as if you didn't know he had a
girlfriend. Let's straighten this out. Just because we live in the same
neighborhood, and you see him (sometimes with me, sometimes by himself)
walking/riding past your house, doesn't mean he wants you to chase him. If
he still wanted to be under your charm, he wouldn't be where he is now
(hence the lack of effort on his part). Between us girls, I know this is
harsh, and I don't want to hurt you. I only wish you'd end your own
suffering. He still cares about you, as a human being; as a compassionate
person should for all sentient beings. Please do not misinterpret this as a
second chance for you to 'steal' him back. It only means he wishes you the
best in life, a life without him. Despite what you have tried in the past,
I also wish you the best in life and care for you as a human being even
though I have never met you and I have only heard negative things about
you. Someday you will find a good man to love you and care for your son,
but understand that man will not be him. Your ex has his own life to live.
Now, you continue to "walk that way", and he will continue to walk wherever
he chooses to walk. If we happen to meet in the meantime, we will keep
civil and continue to walk our own paths. "Namaste" From: New Girlfriend of
2010 To: Ex Girlfriend of 2009 "Namaste"