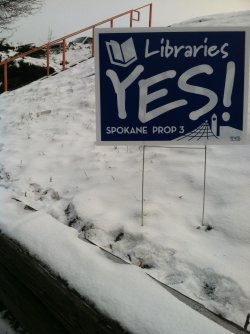 Blue and white signs supporting the Spokane Public Library's tax levy for the February 12 special election are popping up all across town. It's part of a well-organized effort to raise money for the city libraries, which are facing cuts. Library supporters aren't just throwing up a couple dozen signs, either.

That's an intense campaign for a election that happens on Feb. 12, in just three weeks. Will the anti-library crowd push back in like fashion? Remains to be seen.

MORNING BRIEFING: NBA in Seattle and Neanderthals in your belly