Is Charles Krafft a Holocaust denier? Should that matter?

One of Seattle's most provocative and highly sought-after artists, Charles Krafft, found himself at the center of quite a controversy last week after The Stranger posted a blog post titled "Charles Krafft is a White Nationalist Who Believe the Holocaust is a Deliberately Exaggerated Myth." 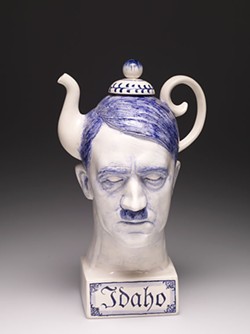 Krafft is not new to pot-stirring with his art. He's made pieces out of "human bone china" — ceramics made from real human remains. He's memorialized great disasters in his "Disasterware" series, and made Hitler-head teapots.

Now, though, The Stranger thinks they've proved Krafft is a Holocaust denier (he's said so on a white nationalist website). And the conversation has been running rampant in the blog's comments — is he? Isn't he?

And, maybe most importantly, should his personal beliefs — no matter what they are — matter to the art world?

"I know he’s kind of iconoclastic. He can be acerbic, and kind of does his own thing," he says. "And he’s been kind of a member of the arts community in Seattle, kind of on the edge. … But he’s always been the person who likes to stir things up."

So, having dined with Krafft and bought his pieces over the years, would Kolva have seen this revelation that he's a white nationalist coming?

"I wouldn’t be surprised by whatever his views are," he says, "The question is whether it’s actually true."

Kolva says knowing an artist's personal beliefs wouldn't impact whether he and his wife purchase a piece of their art. He says the art in their vast collection ranges: beautiful landscapes to ones with heavily-charged political messages. They don't always know the artists behind the paintings and sculptures. Sometimes they do. But art, to them, is about their own reaction to it.

"Sometimes art is a matter of communication and not all the communication you get is going to be what you agree with," Kolva says. "If I’m visually attracted to the aesthetics of the piece, what the deeper origin of it isn’t necessarily important to me.

"I think we have a reaction to it is the first step. We like pieces that make us smile, but they might not be something that would make someone else smile," he says.

"I could see how, given just his attitude and the small amount of times I’ve talked to him, I could see how [these beliefs] might come out. But I could also see it as another thing he’s foisting on the public. You don’t know, that’s the interesting thing."

Would he judge Krafft for having an opinion very different from his own?

"We’re not going to throw out Charlie’s work because of his little article in The Stranger," he says. "I’m not going to shun him."

The first weekend of Spokane Restaurant Week, in tweets and pictures