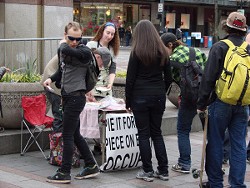 Two young people from Michigan, plus a border collie named Shalosh and a truck named Gracie, are here in Spokane to give you free pie.

Yes, free pie. All they ask is that you “pie it forward.” They’ll be distributing slices today at 6 pm at the Occupy Spokane Clubhouse at 1808 E. Sprague Ave.

“They’ve been busy making pies since yesterday,” says organizer Terry Hill.  Occupy Spokane helped set them up with a place to bake and donated supplies for the made-from-scratch pies.

Sarah Fertig and Chris Kovac hit the road in March, and traveled more than 4,500 miles through 11 states by the time they reached Spokane this week. They stopped in Seattle last week, passing out slices from a table in Westlake Park. “PIE IT FORWARD,” the sign on the table says. “PIECE ON EARTH.”

This will be their fourth pie event on the road, and they’re hoping to arrange one in Montana next. They operate entirely on donations, especially for gas money.

“We would like to help them get to their next stop,” Hill says.

The tentative travel plan winds around most of the country, with future stops in Boulder, Omaha, Minneapolis, Louisville and eventually the East Coast before heading back to Michigan.

They served free pie in Ann Arbor for a few months last year before deciding to take it on the road. On their site, the travelers describe themselves as “aspiring fringe weirdos” looking to visit other fringe weirdos — people who keep chickens, Dumpster dive or convert a vehicle to biodiesel, for example — who have a place to park for a few days and an oven to make pies.

“We know we want to do something, but we don’t know what it is yet,” they explain on their site. “Raising chickens sounds good, but what if we don’t like chickens all that much in person? That’s why we want to meet and learn from as many people as possible on our road trip.”

The project has a “maniFEASTo” partly inspired by President Obama’s “you didn’t build that” speech and the related rhetoric last election season:

I have a pie. I just baked it and I’m really proud of it. It looks delicious. But even though I bought the ingredients and baked it myself, I don’t really consider it “my” pie.

So even though I put the final product together, untold millions of people have helped to make this pie possible. That’s why I’m happy to share it with ANYONE who has less pie or no pie. And all I ask in return is that if I’m sharing the pie I made with you, please try to learn how to bake pies yourself, so that someday you too may share pie with someone who has less.

Get more information — including the recipe — and keep up with their travels here, or follow along on Facebook.

Morning Briefing: Arrest in WSU professor beating and how to catch a foul ball with a beer