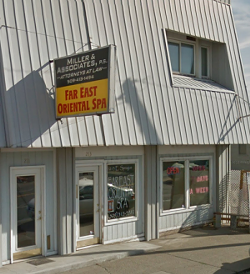 One of Westover's spas when it was in operation, from the street view of Google Maps.

One of the men arrested in last year's "Operation Red Light" for allegedly running two fronts for prostitution in Spokane is on to a new business venture in Portland.

Now, Portland's Willamette Week reports that Westover co-signed a lease for a building that's now home to a strip club (in true Portland fashion, it's a "juice bar with nude dancing"). The club seems to be operating legally so far, but is causing an uproar in the affluent neighborhood where it's located.

From the story: "In posh Laurelhurst, where homes near Diamonds are valued at more than $800,000, the new club is already unwelcome. Tanya Baikow-Smith, who lives less than a block from the club, wants it gone. 'It doesn’t bring the kind of people into the neighborhood that we want,' she says."

Police haven't yet charged Westover — or any of the others arrested in "Operation Red Light" — but his Spokane spas are now deserted.

After the raids last summer, we ran this cover story about whether the spa closures may have driven more prostitutes to the street and what that life is like.