Federal agents in tactical gear and haz-mat suits descended on an apartment building in Browne's Addition this morning as part of an ongoing investigation into two threatening letters containing traces of the poison ricin that were intercepted earlier this week.

FBI spokeswoman Ayn Dietrich confirmed federal investigators with the FBI and the U.S. Postal Inspector Service were executing a search warrant related to the letters near the corner of Oak Street and First Avenue. Investigators say the "threatening letters" were first intercepted Tuesday.

Dietrich did not expect to be able to release additional details on the investigation. She described the scene at the search as a "fluid" situation and could not confirm whether anyone had been detained in the case.

"It's an ongoing investigation," she says.

Federal officials say the haz-mat suits are a common precaution for collecting evidence that may involve contaminants.

The letters tested positive for traces of deadly ricin poison, the union reported, but no injuries have been announced.

Neighbors reported they had noticed law enforcement-looking individuals sitting in vehicles, "staking out" the block in recent days.

The Spokane Police Department, including Chief Frank Straub, had officers securing the area and cooperating with the search. Officers had blocked off the area with patrol cars and yellow police tape. 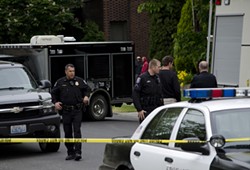