The Spokane Indians spent the off-season renovating Avista Stadium. This week, Mike Bookey writes about some of the work done, including renovations of the front office and team store, a new concessions building, a new pavilion just inside the entrance and walkway resurfacing. (Photos by Young Kwak)

A new concessions stand will welcome fans this year.

A freezer holds beer kegs at the new concessions stand.

The renovations include a new team store.

Mackenzie Dandoy, left, rings up a baseball cap for Chuck Helmuth at the new team store. Helmuth had just picked up his season tickets, which he has held for the past 25 years.

Spokane Indians gear of all sorts can be purchased at the new team store. 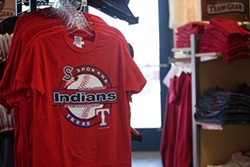 Cassel Promotions & Signs employees install a Spokane Indians sign at the new First Pitch Pavilion, which will be a place for fans to hang out during the game.

The new First Pitch Pavilion will be a place where fans can hang out during the game.

Part of the redesign is in the front office entrance and ticket area.

During front office construction, a floor safe was found. It may or may not be opened this season.