Good news for the Inland Northwest's animal sheltering community seems to be coming in big waves this year. Construction of the new Spokane County Regional Animal Protection Society (SCRAPS) adoption center at 6815 E. Trent Ave. is underway as of this month. In early October, SpokAnimal received a $125,000 donation from the estate of an Inland Northwest resident, one of the largest the organization has ever received.

This weekend, the Spokane Humane Society is celebrating the opening of a new adoption center inside the North Spokane PetSmart store (9950 N. Newport Hwy.) where the shelter is now able to house up to 38 adoptable dogs and cats.

Jenna Carroll, Spokane Humane Society
The new adoption center is located inside the PetSmart store at the North Division 'Y'.
While the new adoption center had its soft opening more than a month ago, PetSmart and the partnering nonprofit, no-kill shelter are ready to show off the shiny new facility during a grand opening party tomorrow, Oct. 26, from 10 am to 8 pm (be there for a ribbon cutting at 10 am). The free event features chances to win prizes, and best of all, half-off adoption fees for all animals there.

The new adoption center benefits both the Spokane Humane Society and the Inland Northwest's homeless pet population in many ways, most importantly by freeing up space at SHS's facilities (6607 N. Havana St.), allowing the organization to accept more animals into its care. Since animals started moving into the roomy kennels at the adoption center in mid-September, more than 80 pets have already been adopted. The new PetSmart adoption center is now one of 18 facilities like it in the U.S. Before it opened, the store had a much smaller room that featured only adoptable cats, from both the Spokane Humane Society and SpokAnimal. SpokAnimal continues to use the previously existing cat room for its adoptable kitties, while the new facility features adoptable animals as part of an exclusive agreement with SHS. The goal is to adopt out more than 1,000 pets at that center each year, adding to the Spokane Humane Society's average animal placement of between 2,500-3,500 pets each year. 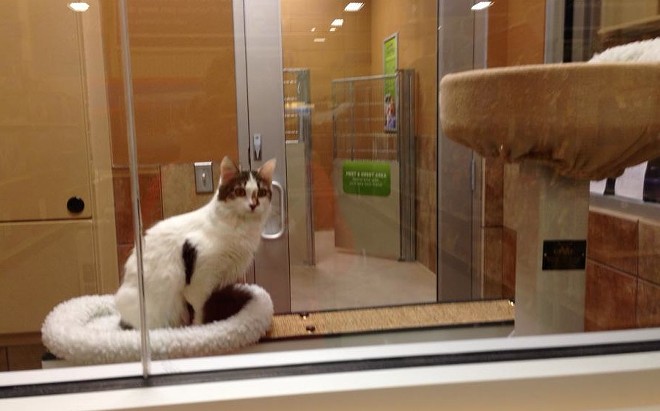 Jenna Carroll, Spokane Humane Society
How could customers resist wanting to go inside to meet all of the adoptable animals at the new center?
Another major benefit of the new adoption area is its visibility to PetSmart customers who pass by its wide windows as they shop. Most adoptions that have taken place so far have been by shoppers who were there to buy items for pets they already own.

A press release about the center's grand opening from PetSmart Charities — a nonprofit organization separate from the retail corporation, and which funds centers like the new adoption center — featured a similar story about two cats, Missy and Sandoz, recently adopted by a customer who saw them while picking up food for her other cats at home.

Not only does the facility provide more chances for animals there to be noticed, it includes open areas for prospective adopters to play and interact with the dogs and cats there. Some of the cats housed there are able to stay in free-roaming cat rooms in place of a kennel, but the size of the kennels can also be reconfigured depending on the number of cats at the center. 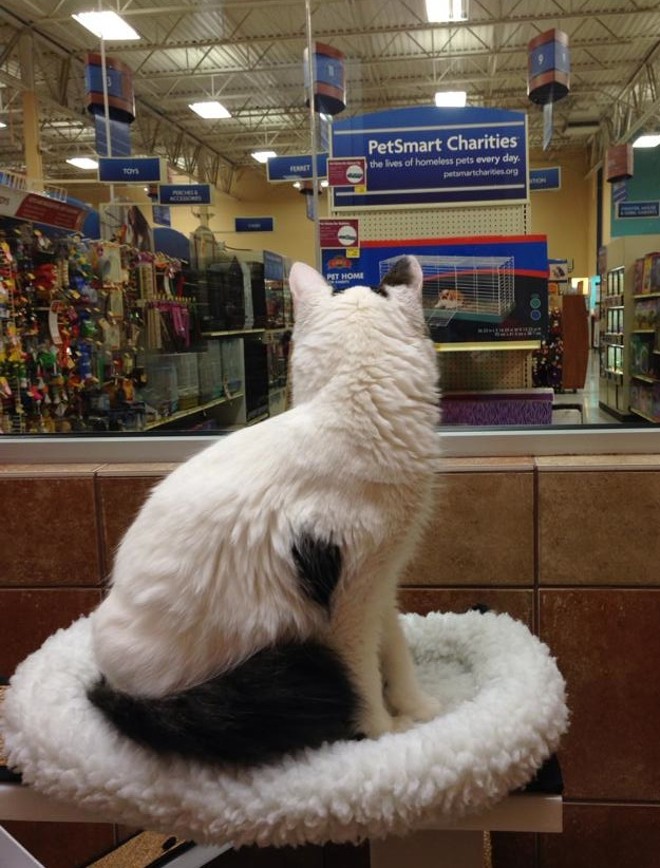 Jenna Carroll, Spokane Humane Society
This kitty has since been adopted, but it seems like she enjoyed staring out the window to entice people to bring her home.
Funding for the new center's construction was provided by PetSmart Charities, with space inside the store donated by PetSmart. Most of PetSmart Charities funding comes from individual donations, including an option when customers check out to add a donation to their total.

The new adoption center is open seven days a week, during PetSmart's regular shopping hours, Mon-Sat from 9 am-9 pm and Sun from 10 am-6 pm.

Why your desk job really may be killing you