The Use of Force Commission's written response to a six-month update on reform efforts at the Spokane Police Department recognizes progress while also calling attention to three key recommendations yet unfulfilled.

"They're acting in very good faith," he says. "We wanted to make sure that we acknowledge their progress." 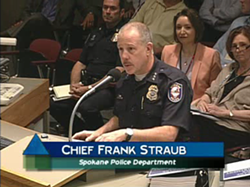 ), commends Police Chief Frank Straub and Mayor David Condon for their preliminary work to implement the commission's 26 recommendations for reforming the police department. The letter serves as a written response to an Aug. 21 presentation (video here), updating them on SPD reforms. Commissioners say they consider the reform effort a "work in progress" for now.

"This is understandable given the complexity of the reforms under consideration," the letter states. "For the most part, the Commission will reserve commenting on the evolution of specific recommendations until such time as the on-going efforts have had a chance to mature."

But commissioners did want to specifically address three reform recommendations under consideration, including the completion of a cultural audit, transparency during union bargaining and the independence of the police ombudsman.

One of the commission's strongest criticisms of the department involved what they found to be a defensive and demoralized culture with issues regarding public service and transparency. The commission suggested the department get a third-party to conduct a culture audit.

While the department has rewritten its mission statement and increased leadership training, commissioners say in their response letter that those changes do not "substitute for the culture audit called for by this recommendation."

Police officials say an upcoming Department of Justice review will look at cultural issues, but did not have an immediate response regarding the letter.

Secondly, commissioners expressed disappointment with a previously imposed confidentiality agreement that closed off negotiations between the city and the Spokane Police Guild. The letter asks the city to avoid similar back-room negotiations in the future.

The commission's final response addressed strengthening the Office of the Police Ombudsman. Commissioners voiced support for the independent investigative authority outlined for the ombudsman in Proposition 1.

"The Commission reiterates its position that an empowered and independent Spokane Office of Police Ombudsman would enhance trust between the SPD and the citizens it serves, provide support to conscientious and competent police officers, and improve the operations of the SPD," the letter states.

Martin says he has followed the recent dispute regarding the police ombudsman's authority and the new OPO committee. While the commission has not discussed the language in the recently rejected tentative agreement with the Guild, they stand by the importance of having an independent ombudsman.

"We believe independence is an important value," he says.

The commission will receive a one-year update from police officials sometime around late February, Martin says. At that point, the commission will be better prepared to comment on the authority outlined for the ombudsman and other civilian oversight issues.

Martin says he was not aware of any reason why the letter from mid-October had not been posted or released in the past month.

"We've always made our reports to the Office of the Mayor," he says of the commission. "It's up to the mayor to decide how he wants it shared."

Brian Coddington, spokesman for the mayor's office, says city officials were not surprised by the issues addressed in the letter. He thanked the commission for their service and guidance throughout the reform process.

When asked why the month-old letter had not previously been released, Coddington called it an oversight, saying he was surprised when he could not find it on the city's website.

"It's just an oversight," he says.

Use of Force Commission Oct. 15 letter by inlanderweb

Macklemore riding a scooter in Spokane