People have been talking about a pedestrian bridge in the University District for a decade, and it’s now closer than ever to actually happening. Not terribly close — construction wouldn’t begin until 2016 or 2017, most likely. But the design phase, approved by the Spokane City Council last summer, should be finishing up in 2014.

You can find out more and offer feedback today at an open house from 4:30 to 6:30 pm at the WSU Spokane South Campus Facility, room 100N (the building where the Bookie is located at 412 E. Spokane Falls Blvd.). Right now, the growing Riverpoint campus is cut off from the East Sprague area by some wide roads and the major barrier of the railroad tracks. The pedestrian bridge would connect those areas and, in theory, create a reason to revitalize the East Sprague neighborhood with housing and businesses that would attract students. The bridge itself is meant to be something of a landmark, with a soaring arch that was favored during public surveys in 2011.

The money for the design phase comes from a $3.1 grant from the state. Funding for construction isn't secured yet, and the total project is projected to cost about $14-16 million.

Here are some images posted on the bridge site: 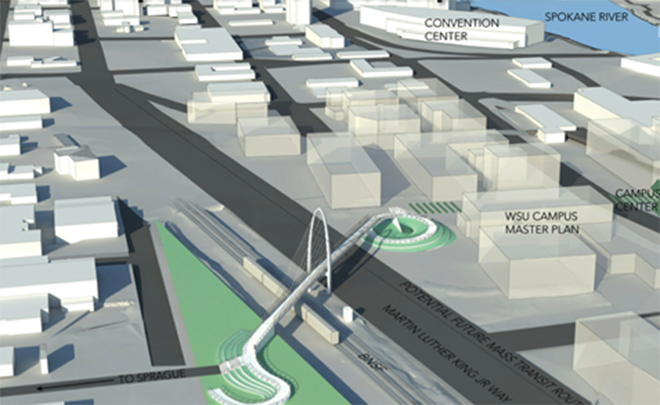