Bizarre Bigfoot body hoax is traced back to Spokane 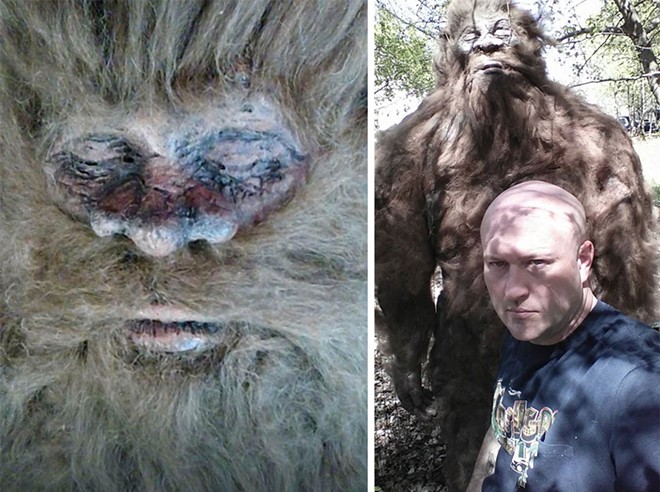 Left: The photo Rick Dyer released ahead of the national tour. Right: Dyer and his Bigfoot.

Earlier this year, a Las Vegas man named Rick Dyer released startling proof of Bigfoot: a photo of weathered corpse he dubbed “Hank” after reportedly luring the creature with barbecued ribs and shooting it outside his tent near San Antonio in September 2012.

Dyer hit the road for a national tour with the body, saying it was “100 percent real” and being DNA-tested at a university he wouldn’t name until the results came back.

Given that it’s Bigfoot and Dyer has a history of fakery, rumors were swirling almost immediately about where the body actually came from and who could have created such a thing. Commenters on Bigfoot forums mentioned the possibility that it originated in Spokane.

Now, after a spiteful falling-out with his crew, Dyer has admitted it’s a fake. And it was in fact made right here in Spokane.

From this moment own I will speak the truth! No more lies, tall tales or wild goose chases to mess with the haters! No more longing into my hater acct to heat the pot. All the so called info the haters received came from either me or a team members that I directed . True or not we just wanted people to talk eg.Prop maker, Addresses, People involved. It was crazy just for the attention!

The people on my tour knew everything from day one, They just didn't expect me to ever come clean, They thought they could say anything they wanted and I couldn't respond without giving my self up!..

He’s since said that although this was a fake, he does indeed have a real Bigfoot body that he hasn’t displayed for fear it will get stolen. 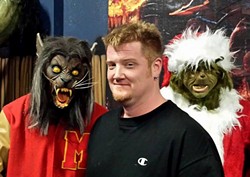 Anyway, the verifiable truth about the Bigfoot’s origins soon came out: It was crafted by Chris Russell, who makes detailed masks, props and costumes here in Spokane with his company, Twisted Toy Box. He says it took about two weeks to make the creature out of latex, foam and camel hair and was told it would be used as a movie prop.

Russell said he’ll do only one interview on the topic, and did that this weekend with Laura Michaels, who posted the full exchange on Facebook along with Russell’s request that it be shared and presented in full without any edits. So, here it is:

Laura Michaels: When did Dyer first contact you? And, what did he say? Also, did you know who he was right away when he called you? Did his name sound familiar?

Chris Russell: He contacted me last year inquiring about having a prop bigfoot body made. I did not know him or his name prior to the phone call. He asked about different styles of props and I discussed options and prices for his body from realistic silicone and punched hair to the flat back prop with glued hair that was chosen.

LM: You said he wanted the body made to use to tour the country while filming a movie for a film studio. When did you find out that he was traveling around with Hank and charging people to see a "real" Dead Bigfoot?

CR: Within a couple of days of Rick picking up the body I began hearing internet buzz and news reports on Rick and his story.

LM: Besides saying he wanted to to look like an old, poorly made, taxidermy prop, did he have a specific idea of what Hank was to look like? Facial features, skin abrasions, etc..? On one Facebook page, called "Bigfoot", the admins went to Vegas to see, study, and take several pics of Hank. This is just a little text of what they said about the body: ~~~ The specimen has moles, blemishes, hair patterns, open sores, veins just below the skin, fingerprints, injuries to the hands, fingers and toes, and what looks like scars on the forehead from likely impact with branches and trees.~~~
Did you specifically do that, because from the pictures they took, it DOES look like there's moles and such, or is it just in the making of the body, the materials used make it look that way?

CR: Rick did send me drawings and images of bigfoot and asked me to recreate certain features in his prop like facial features, fur, feet etc.
Many of the features explained in your question were intended by myself, although some were just happy accidents due to the nature of casting latex and foam.

LM: How long did it take to make Hank, start to finish? Also, was Rick trying to rush you to get it done ASAP?

CR: When Rick inquired about the prop he did ask if I could have it finished in December 2013. I accepted the job knowing I was booked on current projects that would be finished to allow time for Ricks project. I was paid and put the job on the project board in the shop. Once I started the project it was sculpted, molded , cast, painted and haired within two weeks. Rick did not rush me, I agreed to finish the job by a certain time and I did.

LM: When Rick showed up to your shop, who was with him? Who helped him load the body into the trailer? You said there was one person. Do you know if him name was Lynk? He's ethnic, from Trinidad and Tobago...that's the story we've gotten.

CR: Rick did have one person with him who came into my studio and did see the propknowing it was fake. I asked Rick to only bring one person into my studio with him and I was introduced to the person although at this point I do not remember his name but I believe that person to be Lynk according to his description. Rick and his associate came into the basement of my studio and I lifted the body made of latex and poly foam by myself and took it upstairs where Rick and his associate put it into the box added curtains around the edge of the box and the three of us pushed the box down the driveway into the back of his "Rick Dyer see bigfoot inside " trailer that was parked in front of my studio.

LM: What can you tell us about "Project Footprint"? I know that was the code word, but you also told me a little about it last night. Can you explain a bit about it? Is this the movie that Dyer claimed to have been/still is filming for a studio?

LM: Although Rick has confessed to having the body made, he still claims he has at least one Bigfoot body...somewhere.
Did he ever tell you, during any of your conversations, that he DID kill a Bigfoot?

CR: Rick has maintained throughout all of our correspondence that he did indeed kill a real Bigfoot yet needed a prop body to take on tour so that the real Bigfoot would not be stolen.

Hey procrastinators, you still have a few more hours to sign up for health insurance