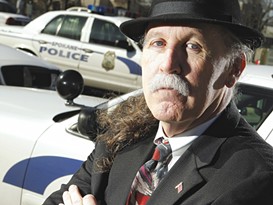 After months — years, really — of public debate, the most recent changes to the city's Office of Police Ombudsman took effect last month. While some hoped for more, others have called the changes a compromise and now city leaders have taken to enacting them.

The most crucial step will be to seat the new five-member commission charged with overseeing the ombudsman. Adding to the urgency is the fact that current ombudsman Tim Burns' contract expires in August and only the OPO Commission can renew his contract or hire someone else.

While the new law outlines most of the details of the commission, some were left up to the city, like how extensive of a background check commission members should undergo and what efforts should be made to ensure diversity among the group. So, City Attorney Nancy Isserlis hosted two public meetings to discuss those issues (watch them here) and passed on her recommendations to the mayor and city council this week.

Among them, she recommends a background check for those who make it into the "final pool" for the commission, but not for every applicant. And while she does not specify racial or socioeconomic groups that should be represented on the commission, Isserlis writes: "It is important the the five members be reflective of diversity and inclusion, and that a proper balance of viewpoints be adequately represented. Divergent viewpoints will be healthy for the Commission, good for the community, and will result in continuing the restoration of integrity and trust of the Police Department."

According to the ordinance passed by the council earlier this year, the mayor will appoint two commission members and the city council will appoint three, with one representing each council district. All appointees must be approved by the council. The city will not prohibit those with criminal convictions from being on the commission, but applicants must not have convictions for crimes "involving dishonesty or moral turpitude" within the last seven years. (As Isserlis clarified during one of the public meetings, that classification applies to basically every crime.) Current and former city and Spokane Police Department employees will not be allowed. Read the full outline of the rules and role of the commission here.