Rock the Nest brings music lovers to the Yards 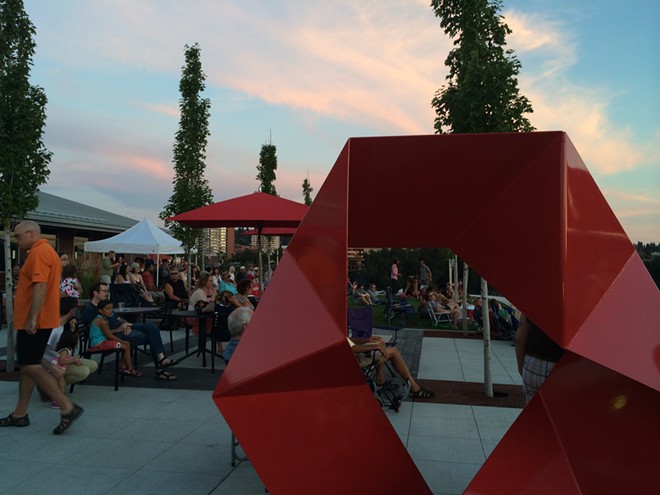 LAURA JOHNSON
Concertgoers gather for the opening night of the Rock the Nest concert series.

Happening in the Inlander's own backyard, we thought we’d check out last Wednesday’s kickoff for the Rock the Nest concert series at Kendall Yards. With the sun slowly setting behind the Carmaros’ set, the crowd of families, young adults and retired people scattered across the lawn and umbrella-covered tables got to experience what the space was really intended for — live music from local bands.

Here’s what to expect from the three shows left this summer:

LAURA JOHNSON
The Camaros play the first show of the 2014 Rock the Nest concert series at Kendall Yards.
A 2011 Band to Watch, Silver Treason is what happens when punk rockers go country.

AUG 13 – The Cronkites
Together more than 17 years, the Cronkites play a blend of rock ‘n’ roll that anyone will remember fondly.

AUG 20 – Folkinception
Like their name implies, Folkinception is a folk band with elements of bluegrass and rock. They played last year's Rock the Nest series too.

This year, promoters chose to move the concert time to 7 pm allowing the sun to be less overbearing, also giving folks a chance to check out the bevy of new restaurants that have opened in the neighborhood in the last months before the show.

Concertgoers are encouraged to bring lawn chairs, blankets and stocked picnic baskets for the event. All shows are free and open to all age groups.