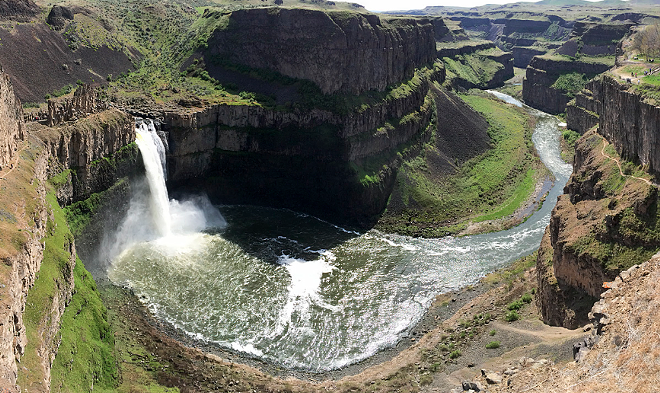 Jacob Jones
Palouse Falls State Park has shut down its potable water supply for the rest of the season. Still pretty though.

OUTLANDER serves as a weekly (at least) round up of Inland Northwest outdoor recreation and natural resources news. This feature will highlight a wide variety of issues and events, ranging from camping stories to national environmental disputes. We’ll also try to include some scenic photos. Feel free to pass along suggestions or curiosities. Read previous Outlander posts here.

State parks officials announced this week that potable water at Palouse Falls State Park (pictured above) will be shut off for the rest of the season due to concerns about contamination. Park remains open, but bring your own drinking water. (State Parks)

Wildlife officials hunting from a helicopter shot and killed one member of the Huckleberry wolf pack in Stevens County. At least 22 sheep kills have been tied to area wolves. Conservationists have called for increased nonlethal efforts while ranchers have defended the right to graze in the area. (WDFW/Conservation NW/S-R)

Meanwhile, Idaho wildlife officials would ask the public to report any wolf sightings in the state to help biologist track activity. Take note of color, size, behavior or other details. (IDFG)

With one last blast, the Glines Canyon Dam, the largest dam to ever be removed, came down this week, restoring the unencumbered flow of the Elwha River through the Olympic Peninsula in western Washington. (National Geographic). Watch the explosion. (ElwhaFilm.com) 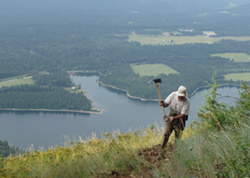 The wild story of a man living in the woods of central Maine for nearly 30 years without human contact. (GQ)

Petzl climbing gear’s technical director hosted an AMA on Reddit earlier this week with lots of technical jargon like: “A locked, tri-loaded carabiner usually falls around 30-50% of its major axis rating.” So if that gets your motor going, check it out. (Reddit)

Friends of Scotchman Peaks Wilderness also announced the reopening of historic Star Peak Trail No. 999 after months of trail rebuilding. The group also offers a variety of guided hikes this fall. (Scotchmanpeaks.org)

And we’re on Twitter now. Check out it out for bite-sized updates throughout the week.

In defense of Steven Moffat, Doctor Who's controversial showrunner