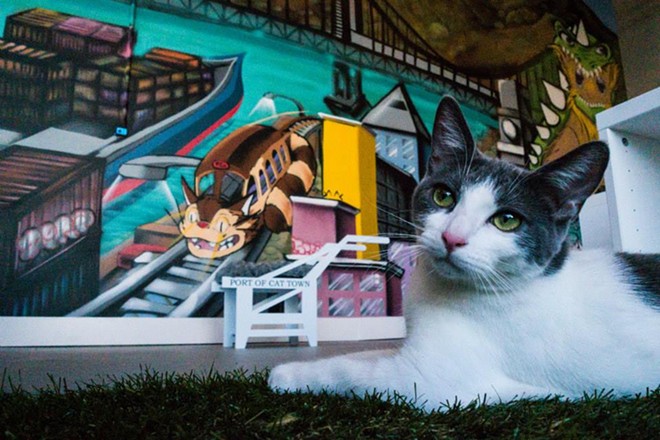 Coffee and cats. What a nice, warm, cozy combination.

This complementary pairing of kitties and caffeine in the form of cat cafes, a trendy concept that originated in Taiwan a few decades ago, is rapidly taking off around the world. The United States welcomed its first "cat-fe" last month, with the opening of Oakland's Cat Town Cafe, and other West Coast cities are already following suit. Both Portland and Seattle are set to each welcome a cat cafe sometime next year. (More about that below.)

While it's assumed cat lovers view cat cafes as one of the best cultural trends to have ever gained traction, others will scoff. Why would you go somewhere to hang out with cats if you already have cats at home? Why would you would want to eat or drink in a room filled with cat fur and other potential contaminants?

Lots of reasons, it turns out.

The draw for these cultural oddities in the large metro areas where most cat cafes are located isn't limited to the quiet and calming companionship the feline species offers. In high-density population areas where having a pet may not always be allowed due to tenant contracts, such as in Japan — which has the highest number of cat cafes at more than 150 — the concept is appealing to busy professionals who can't make the commitment to owning and caring for a pet.

Besides offering a soothing escape from life's daily hustle, many cat cafes are also part-time adoption centers. Oakland's Cat Town residents are all adoptable, should a customer become so enamored they can't bear to part with the friendly feline they've met over a latte. The intent behind placing adoptable cats in a more relaxed setting like a cafe — in contrast to a crowded, loud shelter — is also a way to showcase cats needing permanent homes in a more uplifting and positive environment. Leading up to Cat Town's debut on Oct. 25, co-founder Ann Dunn said the cat cafe concept is also a "way to lure people in that’s sort of passive." 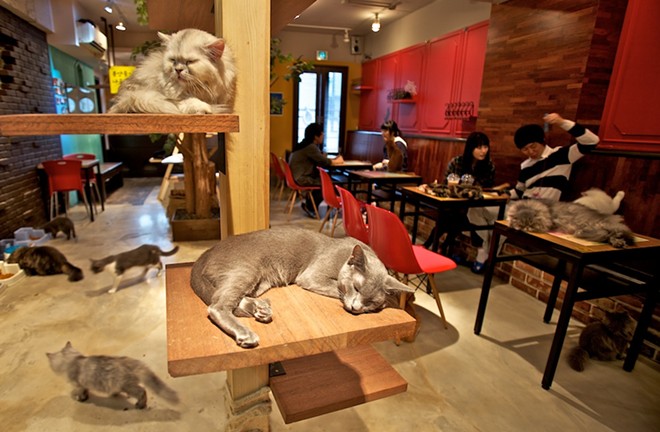 A scene from a Japanese cat cafe. Japan has the most cat cafes in the world with more than 150 across the country.

And you'd better believe there are very strict health regulations in place at these food-with-cats hybrids, at least from what we know about state-side businesses. Food must be prepared in a completely separate area from where cats are housed.

Before you get too hyped about heading to the Cat Town Cafe, or any other international versions, make sure to check the cafe's website, or call, to see if reservations are needed before your visit. To prevent a mass of excited, squealing humans from scaring and overwhelming their furry residents, cat cafes in Europe (like this one in London) and Cat Town only allow a predetermined number of guests into the cat's lounging quarters at once. Most cafes also have a set of basic guidelines all customers are asked to follow when interacting with the cats.

While Cat Town became the first to actually open in the U.S., other Western cities aren't far behind. Another Bay Area cafe, KitTea, was set to open in San Francisco this summer, but hasn't announced yet when it will officially open.

Closer to Spokane, Portland is set to get its own kitty coffee house with Purringtons Cat Lounge. The business's site says it's set to open in early 2015, and is partnering with Oregon's Cat Adoption Team (CAT) to house adoptable kitties alongside its espresso offerings. The cafe is to be located in the Northeast Portland area, at 3529 NE Martin Luther King Blvd.

Meanwhile, the Rose City's northern rival Seattle is not to be outdone, and plans for its first cat cafe, Seattle Meowtropolitan, are in the works. The couple behind the concept, which is planned to follow in the footsteps of its predecessors by housing adoptable cats, recently launched a Kickstarter campaign and they're hoping to open the cafe sometime in mid-2015. A location hasn't yet been determined.

As amazing as it would be for Spokane to have its own cat cafe, I have my doubts that a city our size could sustain a business concept like this in the long-term. Do readers agree or disagree? Why or why not? Would you visit a cat cafe as a tourist in another city? Have you already been to one? We'd enjoy readers' thoughts on the subject. Please comment below or email me, at cheys@inlander.com.

Also, don't forget to check out the results of the 2014 Cat Friday Halloween Cats Photo Contest! The results were posted last Friday, and we're still waiting to hear from our winner.