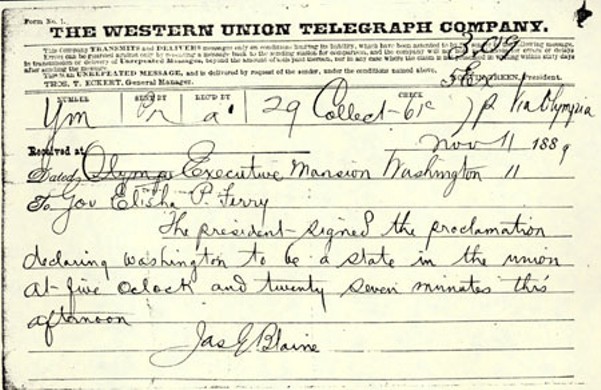 But the announcement, which arrived at the Capitol via telegram at 3:09 pm, came a little later than expected. On Oct. 1, male voters ratified the state's constitution by a 40,152 to 11,879 vote. A copy was sent by courier to the president for his approval.

As it turned out, then-Gov. Miles Moore forgot to sign the constitution, so President Harrison couldn't approve it, according to the Washington State Historical Society. A new copy was drafted overnight and sent by courier to Harrison the following day.

In meantime, Montana beat Washington to the punch and became the nation's 41st state on Nov. 8. The Chehalis County Chronicle summed up Washington's frustration with Moore this way: "Washington's territorial governor must be a terrible ignoramus. By reason of his failure to properly certify to and sign the constitution upon which the president's proclamation must issue he has delayed matters for at least a week."

You can learn more about Washington's history and legacy at the Secretary of State's online exhibit "Blazes, Rails and the Year of Statehood." Want to help celebrate Washington's birthday? Tweet "Happy birthday Washington #WA125" this afternoon at 3:09 pm.