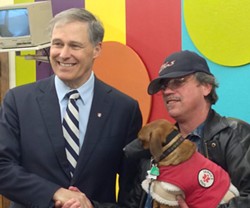 Lael Henterly
Governor Jay Inslee shakes hands with a client at Volunteers of America Thursday April 2.
It had been a rough couple of years for Julie Firzlaff. After seven years of homelessness she had tried everything to get off the streets. State programs wouldn’t help her because she didn’t have children. Shelters were a stop gap. Then things got even worse. She ended up in the hospital and had gall bladder surgery. Then she was diagnosed with chronic lymphocytic leukemia.

Released from the hospital, Firzlaff found herself wandering the streets, her thoughts a blur. She could hardly figure out where to get her next meal, let alone plan her next trip to the doctor or the pharmacist. Enter Volunteers of America (VOA) case manager Leona Flowers.

“I call her my guardian angel,” said 37-year-old client April Lassich, who came to Spokane fleeing a domestic violence situation only to find herself homeless with a quickly failing heart and other debilitating ailments.

Flowers got both Firzlaff and Lassich into respite care facility at Hope House after they left Providence Hospital. She then helped them transition into permanent housing with the VOA's Housing, Homelessness and Healthcare program (H3). The VOA found the women apartments, pays for their rent and helps with transportation needs.

The goal of the program is to put chronically ill people in housing situations where they can stay on track with doctor visits, medications and treatment. This keeps them out of emergency rooms and leads to better longterm outcomes and lower overall costs.

“I wouldn’t be alive today without the help of the Hope House and the Volunteers of America," said Firzlaff, tearing up a bit. "My doctor told me so."

The H3 program is one of the most successful pioneers in a larger state effort to put healthcare in the hands of local communities. Known as Accountable Communities of Health (ACH), these regional collaborations rely on local community organizations that know their clients and can best decide how to address their needs.

Gov. Jay Inslee listened, rapt, to Firzlaff's story Thursday afternoon. He had stopped by the VOA's downtown location to meet with women who have benefitted from his Healthier Washington plan, a multifaceted effort to make Washington the healthiest state in the nation.

"You oughta get a gold medal for that," Inslee said to Firzlaff after she finished describing how she survived the streets with a six-inch-deep incision in her abdomen.

"We wanted to show the governor how, in eastern Washington, this is one of the ways we’re implementing his Healthier Washington plan," explained Empire Health Foundation Government relations and Communication Director Erica Hallock.

So far 267 men and women have been referred and 46 housed through the H3 program.

"They're one of the best in the state," said Governor Inslee's Senior Health Policy Advisor Dr. Bob Crittenden of Empire Health Foundation's efforts so far.