Unexpected delights, even when winter doesn't bring a lot of snow 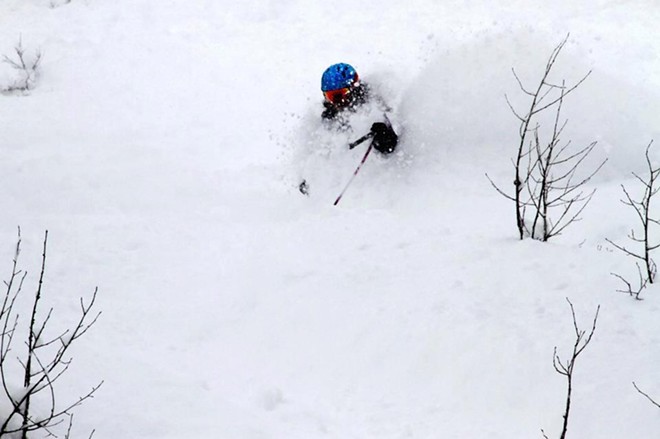 Joe Johnson, Canyons Resort
I was on a road trip during the winter of 2011-12. It’s hard to leave home when epic conditions are in progress, but my love for experiencing different mountains, meeting new people and discovering new stashes outweigh staying home. The itinerary for this Ski Utah adventure was to ski Deer Valley on Friday, Park City Mountain Resort (PCMR) on Saturday, the Canyons on Sunday and Monday and Alta/Snowbird on Tuesday and Wednesday.

I arrived into Salt Lake City Airport, skis, boots and my luggage in tow, on an early morning flight. Picked up my rental car and I was on my way. As I made my way up Parley’s Canyon on Interstate 80, the temperatures were rising as well as the sun.

I skied the quintessential spring day at Deer Valley. It was warm. The forecast for the night was not looking good, with precipitation on the way and the current temperatures being so warm. But at least I was skiing. I awoke the next morning to rain. Rain that made its way to the top of the mountain peaks in the area. Looks like I was spending the day watching March Madness with friends instead of adventuring around PCMR. I still remained hopeful that the temperatures would drop so that my itinerary would get back on track.

Luckily they did, and Sunday morning I was back on skis. I was met in the Canyons Village by Joe Johnson, my tour guide and social media coordinator for the resort. We quickly loaded the chair and he started talking about the mountain and the day in front of us. Because the temperatures had been warm, the snow that had fallen was similar to what we are used to skiing in the Northwest.

We had a blast! There was a definitive snow line on the mountain and for the majority of the day we were able to stay above it.

The next day brought in the epitome of Utah skiing — cold temperatures, blizzard-like conditions and about 14 inches of new snow overnight. It was a Monday in March during a bad snow year. No one was there. Most of the locals had decided to move on to their springtime hobbies. We lapped aspen groves repeatedly. The only tracks to cross were our own from the previous runs. The snow was coming down so hard that it was like someone was hitting the reset button between each descent.

On the chairlift, I mentioned to Joe that Schweitzer, my home mountain, had just managed to achieve a base of 200 inches. His response, “We haven’t even received that many total inches of snowfall this season.” It was March 19th. But as you can see from the picture, which was taken that day, you would have never guessed it was a "bad snow year."

The moral of the story? Don’t let the weather prediction for this winter sway your actions now. Buy your passes. Make your travel plans. Rent your lockers. Even in a bad snow year, there will be moments of greatness. Stay positive and prepare now for those unexpected, great days.