What you need to know about the possible E.coli outbreak at Chipotle 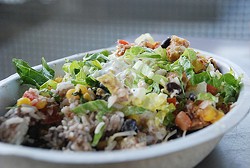 A Washington woman who says she was infected with E.coli after eating a Chipotle burrito bowl filed a lawsuit in federal court Monday. The Mexican fast-food chain closed 43 of its locations throughout the Pacific Northwest over the weekend as a precautionary measure until health officials can determine the source of the contamination.

How many people are infected?
The lawsuit claims 22 people throughout Washington state and Oregon are infected, but other reports say 23. The number is expected to rise, but not dramatically, Washington state epidemiologist Dr. Scott Lindquist told The Associated Press. So far, no one has died, but eight people are hospitalized.

Chipotle has about 1,900 locations nationwide. Although only six locations in Washington and Oregon were implicated in the outbreak, the company closed all of them throughout both states as a precaution, including Spokane's outlets.

Is Chipotle to blame for sure?
We don't know that yet. Health officials in Washington and Oregon are still interviewing people and testing blood to identify the source.

At least two people don't believe they ate at Chipotle, according to the Seattle Times.

Why Chipotle, why?!
It turns out the very thing driving Chipotle's popularity, its focus on fresh food from relatively small, local farms, might also be contributing to these outbreaks. The restaurant prides itself on using preservative-free produce and meat. This makes the food more susceptible to infection than, say, a larger chain like McDonald's or Taco Bell that uses bigger suppliers.

E.coli symptoms and should you go see a doctor?
Health officials are encouraging anyone who's eaten at Chipotle in Washington or Oregon between Oct. 14 and 23 to see a doctor. Symptoms of the bacterial infection include vomiting, bloody diarrhea, stomach aches and nausea.

Which candidates are taking the most out-of-town campaign money?