CAT FRIDAY: The mobile game Neko Atsume is making us lose our minds

Since downloading Neko Atsume onto my Android phone a couple weeks ago, I've been (mostly) sticking to my vow not to get online and figure out how to attract all the rare cats to my yard. (Because, spoilers!) No easy feat — the Japanese-created game's combination of overwhelming cuteness and an arbitrary time schedule have spurned an entire online community of wikis, guides, fan art and more.

I wanted to figure out this passive, kitty-collecting game myself, without help! But after insisting that everyone in my circle of cat people should download the game, we've created our own local Neko Atsume tip line. We'll share some of our beginner tips (mostly spoiler-free) below.

Neko Atsume, Japanese for "cat collector," was originally released in Japanese back in 2014, spawning a huge following in the cat-obsessed island country. Non-native speakers hungry to experience the game's adorable cartoon nekos used the power of Internet to translate and clunk-ily play the game. Thank our lucky stars, Neko Atsume developer Hit-Point decided to release an English version last October.

The gameplay is incredibly simple — place food and toys in your "yard" and a rotating cast of cats will stop by for a snack, playtime or a snooze. Cats show up randomly, so you have to check in to the app every so often to see which kitties have come to see you. Their visits are automatically logged in your "Catbook," but you can also snap photos of their antics to save in each kitty's photo album. New cats are logged in the Catbook after they show up for the first time, but you won't know anything about them (each cat has a set of unique stats) until you manage to catch them in the yard, in real time.

OK, so what's so special about that? It's definitely the understated simplicity of the gameplay, which requires somewhat minimal effort. The payoff comes in the randomly timed visits from adorably drawn 2D cats. Game artists' attention to capturing all sorts of feline mannerisms and traits was also spot on. (Just look at those little cat butts!) The range of animated drawings used to show them playing or calmly snoozing are seriously squee-inducing. Each kitty has a different color/coat pattern, so there's definitely some thrill in seeing what the next "new" cat will look like. 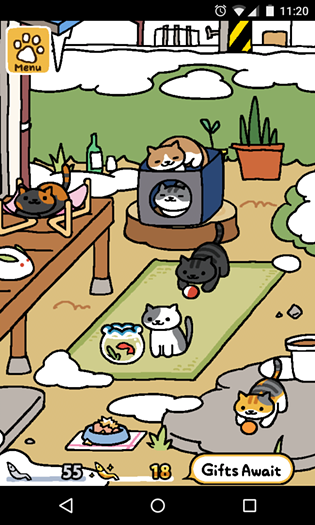 Perhaps best of all, this all-ages game available on both Android and iOS, is free. Of course, you could spend real-world money to increase your stash of fish, used to pay for new items and food in the game, but it's not necessary if you're patient enough to wait for the kitties to bring you enough fish as their way of saying 'thanks.'

Now that you're logging into the app store to download this game right meow, we'll share a few tips to help get you started on your kitty-collecting journey! Other deeply specific web resources for the game are beyond plentiful, so seek them out if you want to figure out how to get all the cats to your yard quickly as possible. Or don't. (Personally, I think the fun of simple games like this is the joy of discovery.) If you're stuck though, there's an entire subreddit devoted to Neko Atsume, a Wikia and of course, the wealth of Google.

Here's a list of 10 quick tips to improve your cat-collecting experience, based on the Inlander Cat Team's personal discoveries:

1. Save up gold fish to expand your yard as soon as you can. This lets more cats visit simultaneously.
2. Move your items around in the yard frequently. Cats get bored of the same things all the time, obviously.
3. But don't put items away that are in use by a cat! If you do, they won't leave you very many fish. It's also kind of rude to kick them out.
4. Buy the "fancier" canned foods in bulk packs of three. It's much more cost-effective.
5. Use the "frisky bits" food if you're running low on funds rather than the free "thrifty bits." Once those cats get a taste of the good stuff, they're not going back to budget brands...
6. If Tubbs (don't look him up if you don't want to be spoiled!) is in your yard, wait until he leaves to "refresh."
7. You can rename your cats! It's not super intuitive, but in the Catbook, tap on their name and type in a new one.
8. Some cats, including most of the "special" or "rare" cats will only come for specific items. You can look them up on any of the online resources if you don't know what item to put out.
9. To set an in-game photo of a cat as its profile pic in the Catbook, click through to its album and triple-tap an image to select it as the "best shot." It'll move into the main image spot on their Catbook page.
10. Certain items will cause cats to bring you more fish than others. Again, you can look this up online, but we also can't help but share the following tip: green cushion.

24 and Prison Break are coming back. What do they need to be good?