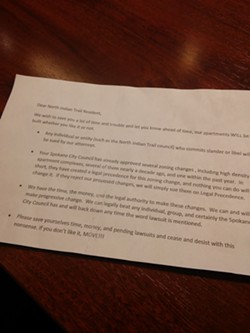 A note left for residents of North Indian Trail
Thursday’s meeting of the North Indian Trail Neighborhood Council was supposed to be a relatively routine affair that included update of its bylaws and a presentation on crime in the area. Instead, residents were left aghast from anonymous notes left on attendees’ cars that threatened lawsuits for libel and slander. They also came with a promise that “our apartments WILL be built whether you like it or not.”

“It would be like putting a little town in Indian Trail,” he says.

But both companies have denied having anything to do with the notes that stated, “We have the time, the money, and the legal authority to make these changes.”

“Please save yourselves time, money, and pending lawsuits and cease and desist with this nonsense. If you don’t like it, MOVE!!!” reads the notes.

“It seems odd that someone would go to that effort to put something out like that,” says Jay Bonnett, the owner of an engineering company representing Morning Side Investments LLC.

“We have come together today to condemn the flyer, it's hurtful words, and it's [an] attempt to pressure neighbors from being involved in the public process,” reads the statement. “Everyone has a right to be heard during a Comprehensive Plan Amendment process. We all agree that these decisions need to be made following thoughtful discussion and civil discourse. This flyer encourages neither, and we are saddened that an individual or individuals have chosen this damaging route to sway public opinion.”

Jim Bakke, a North Indian Trail resident, says 136 people were present for the meeting. He was going over the bylaws change when the notes were discovered causing an audible gasp from the audience when one was read out loud.

“I pointed out after I read the note that if you deal factually and you back up what you say and you present it reasonably and respectfully you can’t be sued for libel or slander,” says Bakke. He also advised people to not name names when talking about the apartment building because

“You can’t slander an apartment building.”