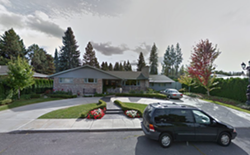 Arbor Rose
Arbor Rose, a Spokane adult family home that provides care for disabled and elderly individuals, has been fined $500 by the Washington State Department of Social and Health Services for improperly discharging a resident.

The name of the resident was redacted in documents obtained by the Inlander and a department spokesman, Chris Wright, wouldn’t reveal the identity of the individual. However, the circumstances are very similar to those of George Crowe, the subject of a recent article in the Inlander. Crowe is a 67-year-old who was taken in Arbor Rose after a bike accident left him a quadriplegic, only to be left stranded in a hospital after being abruptly discharged from the home.

In February, Crowe was sent to Providence Sacred Medical Center to be treated for a bladder infection. Shortly after being hospitalized, Crowe says that Steve Andrews, the owner of Arbor Rose (who didn’t return a call seeking comment on the fine), abruptly cleaned out his things. Since then, Crowe has been unable to find another facility, leaving him stuck in the hospital at the taxpayers' expense.

Under state law, a home must attempt “reasonable accommodations” before discharging or transferring a resident. If it does go through with a discharge, it must notify the resident with enough time for an orderly exit.

The summary states that the “home declined to readmit the resident based on not being able to meet the resident’s need,” which is consistent with what Andrews had previously told the Inlander.

“It depresses me,” the resident is quoted as saying in the summary of their discharge. “I’ve been positive through my [redacted] until this. I feel really emotionally distressed.”

“The provider and resident manager were interviewed and they identified the reasons for declining readmission, including: nonpayment, no practitioner and issues with the resident’s Power of Attorney,” reads the summary. “However, the home did not attempt to resolve the issues in order to keep the resident at the adult family home.”

According to documents, Andrews was issued a fine after he “failed to attempt reasonable accommodation prior to issuing a discharge notice and failed to notify the resident of the discharge notice.”

Mayor whips out his veto pen over transit ordinance