FILM REVIEW: The Innocents a heady exploration of faith, fact 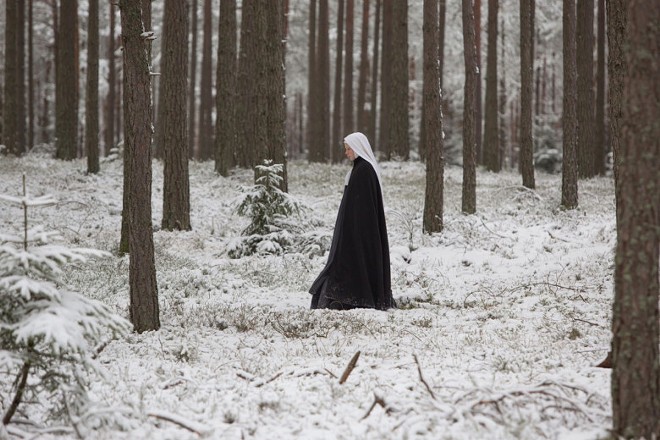 A nun frantically seeks medical help for a fellow sister in The Innocents
During the opening scene of The Innocents, a group of nuns recite their morning prayers. The camera pans slowly, delicately, to show their faces, simultaneously framing the abbey's arches in striking, patterned fashion. A woman's tortured howl echoes through the hall. Most of the nuns ignore the disruption, but one seems agitated. She neglects to bow at the prayer's end as all the others do.

This scene sets the stage for the film to follow with a brand of concise effectiveness that's rarely witnessed. Despite a total absence of dialogue, it immediately establishes the conflict that anchors the film: the internal clash of religious beliefs with the horrors of reality.

Soon after the opening sequence, viewers are introduced to Mathilda (Lou de Laage), a French Red Cross doctor working relief in post-World War II Poland. One night, Mathilda reluctantly follows a desperate summons to an abbey, where she finds a nun on the verge of giving birth. Mathilda learns that the nunnery has been ravaged by rape, swept through by a company of Soviet soldiers in the aftermath of the war, leaving many of the nuns pregnant. The abbess (Agata Kulesza) worries that if the Polish Red Cross is notified of the nunnery's state, their violation of religious protocol will be reported, and the abbey will be shut down. Thus, Mathilda finds herself the sole caretaker able to save the nuns' lives while allowing them to salvage their faith.

Of course, the task proves hardly simple. Mathilda is met at every turn with resistance. Some nuns are terrified to let the doctor examine their bodies, fearing eternal damnation if they break their sacred oaths. It's difficult not to groan at their stubbornness at points; Mathilda's atheistic insistence that the nuns' dire need for medical treatment trumps all potential religious consequence certainly seems the side that viewers are more likely to take in the ideological conflict.

But The Innocents is careful to temper its portrayal of the situation so as not to come across as condemning religion. Each of its complex, nuanced characters adds a unique wrinkle. For instance, the tragically devout abbess, who boasts probably more shades of grey than anyone else in the film, is a fascinating personality, and viewers will likely find themselves forced to reevaluate their opinions of her over the narrative's course as her motivations are unveiled.

Meanwhile, Maria (Agata Buzek), a close confidant of the abbess, speaks of her own past before she took her oaths as a nun. She calls faith "24 hours of doubt and one minute of hope," a line which effectively serves as a microcosm of the film's arc.

Some of the dialogue is less nuanced, bordering on heavy-handed. In fact, the screenplay, a joint work by Sabrina B. Karine, Pascal Bonitzer, Anne Fontaine, and Alice Vial, is frequently at its best during its quieter moments. De Laage does an impressive amount of speaking with her eyes, bolstering some of the quieter, character-driven moments. One sequence in particular, taking place in the white, wintery forest surrounding the nunnery (a place which also serves as a nice locale for director Anne Fontaine to play with the striking color contrast of the snow with the nuns' dark robes) portrays what is possibly the epitome of the doubt that Maria speaks of — all in utter silence, with only the film's restrained orchestral score as a haunting auditory backdrop.

In the end, the film's exploration of its main themes of religion and reality is satisfying: profound and thought-provoking, yet purposefully unresolved, left up for audience interpretation to a considerable but not extreme extent. Its other attempts at thematic significance, those involving cultural and political ideas — mostly with respect to Mathilda's communistic upbringing and a few indications of ethnic clashes — feel underdeveloped and somewhat purposeless. Thankfully, the film doesn't spend too much time dwelling on these shallower topics; the bulk of its run time is spent tackling its meatier ideas.

Though it may not leave you with much in the way of concrete closure, The Innocents might just stir up some important conversation about the ideal balance of religion with modern science and objective realities. It can be a difficult film to watch, but it feels like an important one.

Condon not backing down, Hillary speaks and headlines to end your week

The Innocents is not showing in any theaters in the area.