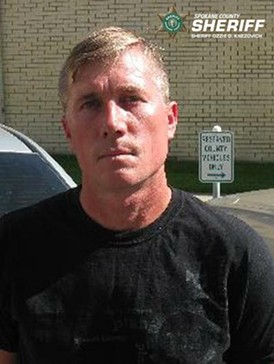 Mikhail Karpov
Remember the guy who was arrested twice this summer after he allegedly exposed himself and masturbated in front of kids?

Well, the charges against him have been dismissed — because Spokane County prosecutors failed to establish at trial that the alleged crimes took place in Spokane County, a basic requirement in pursuing a criminal case.

Today, after a three-day jury trial, the five counts of indecent exposure facing 47-year-old Mikhail Karpov were dismissed with prejudice, which makes it difficult to file the same charges again.

Brendan Kidd, the attorney who represents Karpov, caught the prosecutors' mistake and asked Spokane County District Court Judge Vance Peterson to dismiss the charges. "It's a necessary element," Kidd says. "They have to establish that certain acts occurred in Spokane County. And without establishing that information, the jury can't even hear the case. The judge had no choice but to dismiss."
Jim Murphy, a retired Spokane judge, agrees with Kidd's assessment, that prosecutors failed to meet minimum standards in establishing jurisdiction.

"It's a fundamental requirement in any prosecution that prosecutors prove that the event occurred within the jurisdiction of the court trying the case," says Murphy, who used to be a judge in Spokane County Superior and District courts. "The first thing you ask is, 'Where did this happen?' Without that basis, a judge has no latitude other than to dismiss the case."

Although the case was dismissed with prejudice, Murphy says a judge can allow prosecutors to reopen the case later, but is not required to do so.

A second news release from the Sheriff's Office after Karpov's second arrest says he "reportedly exposed himself the day after he was released from jail."

"There is caselaw that says testimony that names streets, hospitals, high schools etcetera in relationship to the offense is sufficient evidence to prove the crime was committed in a particular county," Sterett says, adding that witnesses identified specific intersections and schools at trial. Local law enforcement officers who only patrol in Spokane County also testified.

Sterett says the two prosecutors on the case, Sam Comi and Margaret MacRae, are relatively new to the office and spent a significant amount of time and resources interviewing witnesses and visiting places where the alleged crimes happened.

"In the end, they forgot to ask the magic words, 'Did this happen in Spokane County, Washington?'" she says. "It's a lesson for them to learn to ask those two words, but we respectfully don't believe it was a sufficient reason to dismiss the case."

Indecent exposure is a misdemeanor in Washington state (unless the act involves a person under 14, or unless the accused has previously been convicted of a sex offense). Karpov was facing a about a year in jail if convicted.

Tim Note, a long-time criminal defense attorney who was not involved in this case, says the prosecutor's error is indicative of larger issues with the Spokane County Prosecutor's Office — an apparent lack of supervision for junior attorneys in District Court and a breakdown in the chain of command.

"There's no one you can go talk to," Note says. "Basically they're given marching orders — 'no [plea] deals on this charge or that charge' — but no one's up there showing them how to do their job."

Note says he's requested meetings with supervisors in the prosecutor's office to talk about cases several times, but has been denied, making for an inefficient system. So now he's stopped asking.

"There's no one you can go talk to," Note says. "Basically they're given marching orders — 'no [plea] deals on this charge or that charge' — but no one's up there showing them how to do their job."

In his experience as a judge, Murphy says these prosecutorial gaffes are relatively uncommon, though he recalled a similar situation in a felony rape case in the mid-'90s.

Murphy was forced to dismiss a case against a man who allegedly raped an 18-year-old Eastern Washington University student when then-deputy prosecutor Carol Davis didn't show up for the trial.

Davis had left town for legal training in San Francisco. Murphy says he asked the prosecutor's office if anyone else could fill in. They said no, so Murphy had to dismiss the case.

"I think it points to the requirement for a good training program for new attorneys so they're clear on what's required of them," Murphy says of the recent case that slipped through prosecutors' hands. "It would be a wise thing for the prosecutors office to do."

Sterett, the supervising prosecutor, says attorneys who practice in District Court get refreshers on a weekly basis. The prosecutor's office also provides more formal training for every stage in a trial and sends attorneys to what are known as Continuing Legal Education seminars (CLEs) once a year.

Meanwhile, Karpov is again scheduled to be released from jail.

They're baaaack. Portugal. The Man returns for a November gig in Spokane