New details from the psychologists behind the CIA's torture program, acquittal in toddler murder and morning headlines

NEWS: These grannies have had it. For decades, the gaggle of quirky women (and men) have tried to call attention to global climate change with little effect. Now the 60- and 70-somethings have resorted to breaking the law. Next week, they'll make their case to a judge.

MUSIC: Ahead of Rhymin' Paul Simon's stop at the
click to enlarge 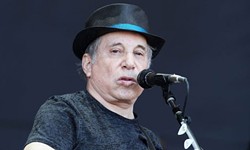 ECSTASY: When you unwittingly take the euphoric drug at a wedding in Australia, and Slayer is blaring, and the "joyous cherub" of a best man is not persuaded by your nihilistic worldview, there is peace.

Verdict: not guilty
The man accused of beating a 2-year-old to death was acquitted yesterday. Jason Obermiller was charged with murder in the death of Adalynn Hoyt, the daughter of Lovina Rainey. He remains in Spokane County Jail, facing federal drug charges. Obermiller's attorneys say they believe Rainey and another man were involved in the child's death. (Spokesman-Review)

Repeal and replace
Senate Republicans released their plan to repeal and replace the Affordable Care Act. It will begin to phase out Medicaid expansion by 2021, repeals the "individual mandate" that requires almost all Americans to carry health-care coverage, cuts taxes for wealthier Americans and bars Medicaid patients from getting treatment at Planned Parenthood. (Vox)

Psych docs' videos
Video depositions of the two psychologists said to be the architects of the CIA's torture interrogation program have been released. John Bruce Jessen and James Mitchell, who had an office in Spokane, say they were pressed to continue the controversial interrogation tactics — such as waterboarding — despite their reluctance. Their statements in the newly released depositions clash with previous portrayals of the men as "eager participants," the New York Times reports.

"I think the word that was actually used is that 'You guys are pussies,'" Mitchell says in sworn testimony released as part of a federal lawsuit filed in Spokane. The ACLU sued the psychologists on behalf of former detainees.