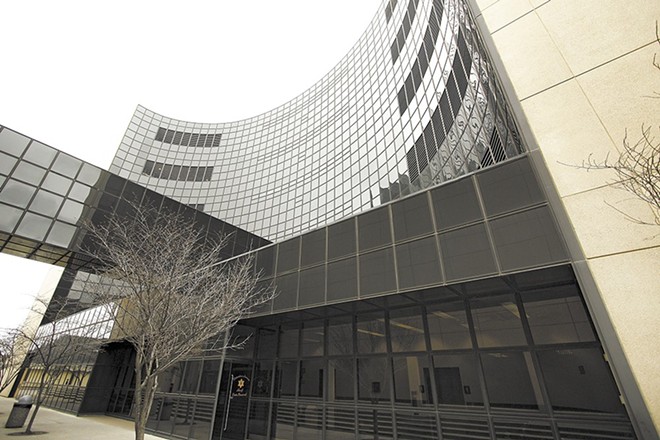 Spokane County Jail
The statistics confirm what many in Spokane have known for a long time. Racial and ethnic disparities in the criminal justice system do exist, and it's not getting better.

And while the average length of stay in the Spokane County Jail, regardless of race, is 17 days, African Americans spend 25 days on average, Native Americans spent 21 days and white adults spent an average of 16 days, the Burns Institute found.

Last week, a band of community leaders and activists sent a letter to members of the Spokane Regional Law and Justice Council expressing their building frustration with the pace at which the council is moving to address these disparities.

The letter, signed by 24 individuals, notes that only $20,000 of a $1.75 million grant from the MacArthur Foundation is earmarked for addressing racial and ethnic disparities. The grant is part of the foundation's nationwide Safety and Justice Challenge that also provides Spokane and 40 other cities with and access to resources, such as the Burns Institute.

"This seems to contradict the message that was communicated to the Spokane community members and stakeholders who participated in the grant application process," the letter reads. "And we are concerned that a year into the MacArthur grant's implementation, less emphasis has been placed on community engagement and racial equity than what was initially implied."

"If the community is frustrated about the data, I think everybody within the system is just as frustrated," she says. "But we are working on it. We hoped that we would be further along by now with that data process."

But, van Wormer says, there has been progress. If not for Spokane's participation in the MacArthur Foundation's program, it would have taken years to disaggregate Spokane's criminal justice data by race.

Going forward, she says, more in-depth local criminal justice data will disaggregated by race and ethnicity, and the Burns Institute will work with the council on building solutions to reverse those disparities. The data will also be published online, van Wormer says.

Additionally, data will be used to create a racial equity "toolkit" as a lens through which to evaluate current policies and decision making with the help of the Government Alliance on Race and Equity, she says.

Kurtis Robinson, recently appointed president of Spokane's NAACP chapter and signatory to the letter, commends the council's efforts thus far, but says there is still a lot of work left to do. He is also critical of the mostly white council charged with making decisions for a system that disproportionally impacts people of color. The majority of Law and Justice Council members are white, though many of those positions are required by statute, such as the county's elected sheriff and prosecutor.

Maurice Classen, a program officer with the MacArthur Foundation who is working with Spokane County on implementing reforms to the system, says the group is largely on track.

He notes that program's primary goal is to reduce the Spokane County Jail population and reducing the average length of stay.

"We're early into the process," he says. "They are on their way to reducing their jail populations using the strategies they've implemented."

Those strategies, van Wormer says, include a more robust Pretrial Services department and the risk/needs/responsivity tool, both of which feed information to judges in all courts that aid in decisions whether to release or hold a person in jail before trial.

And as recently as this week, the Law and Justice Council approved a proposal for a mental health stabilization facility. The 16-bed facility would allow police officers an option other than jail for people, suspected of certain nonviolent crimes, who are showing signs of mental illness or intoxication.

The proposal acknowledges that there is no data showing how, or if, this facility will impact racial and ethnic disparities, but that analysis will happen.