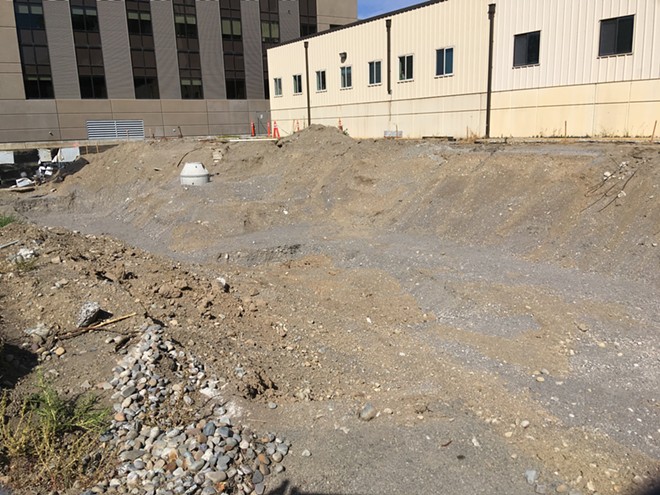 Samantha Wohlfeil photo
Construction of a new building, planned to house intensive outpatient mental health facilities and expanded educational space for medical students at the Mann-Grandstaff VA Medical Center, has been postponed after crews found this vein of soil different from the soil around it. More geotechnical work is expected before work can continue.

Construction has been halted on a new building at the Mann-Grandstaff Veterans Affairs Medical Center that is planned to house intensive outpatient mental health and education space.

Crews working on the expansion to the existing mental health space found a vein of soil unlike the ground around it while excavating for the foundation. Because of that, more geotechnical research will be required before the work is resumed, according to a press release from the center.

For now, the site is exposed, and, based on the geotechnical results, the building may have to be redesigned to mitigate for the difference, says Bret Bowers, a spokesman for Mann-Grandstaff.

"Delays in construction projects aren’t uncommon in the construction world," Bowers says. "We didn’t foresee this, but we’re doing all we can to move past this setback and continue on."

The expansion would add a two-story building with room for mental health services, as well as educational space for medical residents who study through the VA.

About 100 mental health professionals currently help about 7,500 veterans a year at the center and its associated clinics, Bowers says.

The new building was designed to have a multipurpose room in the basement and educational space on the first floor. Even with the delay, which may depend on a new budget cycle, Bowers says the medical center will still continue teaching medical students, who currently rotate through the facility coming from dozens of universities.

"The VA has helped 70 percent of America’s doctors get their medical licenses," through some amount of training at VA hospitals, Bowers says. "Our education component is still ongoing."

Mike McLean at the Spokane Journal of Business originally broke the news regarding the building, citing Bowers as saying that the cost to redesign the "nearly $8 million" facility would put the project over budget.

Read more about the proposed facility in McLean's June 2016 report.