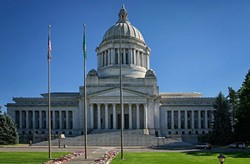 Update Thursday, March 1: The Senate passed this bill, and it will go to Gov. Jay Inslee to be signed into law.

A group of Eastern Washington University students are pushing lawmakers in the Washington state Senate to pass a bill that would clearly define the roles of school counselors, social workers and psychologists so they can better be used to screen students for mental health issues and offer preventive care.

A version of HB 1377 has already passed the House and is waiting to be picked up from the Senate Rules Committee for the chance to get a floor vote by the end of this week.

"We don't focus a lot on recognizing the signs of a mental illness when it’s coming on, which is 75 percent of the time by age 24," says Stacie Baylon, one of the students pushing for the bill, who are all getting their master's in social work at Eastern. "This bill basically defines the role of school social workers and psychologists and it starts by recognizing we don't have enough in our schools."

The students say the bill is necessary because without clearly defined roles, school social workers and psychologists are often tasked with other jobs, like helping with scheduling issues, entering data and other tasks unrelated to their expertise in mental health care.

"These are people who are trained to be mental health professionals, but they're being utilized for other work so they're not always able to use their skills," Baylon says. "But if we could catch people earlier and lessen the severity of a mental illness, that could make a really big difference."

Baylon is working as an intern at Eastern State Hospital, where she's seeing some of the most extreme examples of mental illness, which in some cases could have been treated better had it been caught earlier.

"Going through a serious mental illness, there’s a lot of suffering in that," Baylon says. "If we can do something to help people know how to address their symptoms and how to care for that early on, it saves a lot of money and a lot of suffering."

The bill would require large school districts to allow for six hours of professional collaboration between those professionals every year so they can better recognize students who are having problems and focus on how to help them. It also would create a task force to examine other issues in that field.

Getting some fashion-forward inspiration from dear old Dad