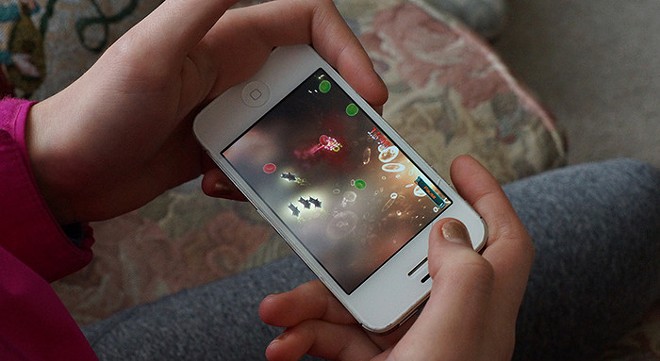 Ebola Attack Kickstarter
The game is set to launch for iOS and Android platforms.

Two Spokane developers are asking for public support via Kickstarter of a mobile game they designed as a fun, interactive way to raise awareness and financial support for one of last year's biggest world issues — Ebola.

Ebola Attack is a mobile (to be launched on both iOS and Android platforms) arcade-style game, by Anna Czoski and Lance Hughes, in which players take on the role of "hero" white blood cells, rushing to defend against the Ebola virus and immunize red blood cells. The game uses tilt mechanics, with the option of an on-screen joystick, to control the playable character.

Ebola Attack's developer duo each have impressive backgrounds writing games and applications — Hughes worked on the popular Adult Swim game Robot Unicorn Attack, and locals walking down west Main Avenue have likely seen Czoski's latest project, a digital installation at Laboratory. Both attended SpoCode's 24-hour Game Hackathon last October, where the idea for Ebola Attack was generated. During that short time, the two were able to produce a working prototype of the game.

Now that its development is mostly complete, the team is looking for public support in the amount of $5,500 to cover various development and marketing costs. The recently launched Kickstarter campaign runs through March 6, and as of this posting a total of $435 had been pledged.
When Ebola Attacks is available to download, plans are for all profits from a paid version to be donated to organizations working on the ground in Africa to fight the virus, like Doctors Without Borders, UNICEF and the International Medical Corps.

Even though national concern over Ebola's spread has largely diminished — with the U.S. measles outbreak taking its place in the media spotlight — the disease is still prevalent in West Africa. Support to treat and prevent its spread is still needed, the developer team says. 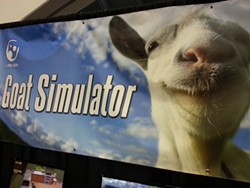 
Videogames, at their stupidest, are all about ‘roided up bros shootin’ aliens.

And last year was a year when we saw plenty of the gaming world at its most stupid, where an extremely vocal minority of “gamers” responded to criticism that many videogames are sexist through profane, aggressive, life-threatening sexism.

The ensuing discussion often dived into how samey games are, filled with their gravel-voiced brown-haired dudes, bland stubbled faces jutting out from their armor. And for many games, the critics were absolutely right.

But lately, the exceptions are boundless. It’s one of the biggest reasons for optimism about the industry. The unique, the innovative, the downright weird is everywhere.

In many senses, games face a similar split as movie industry: Big franchise blockbusters centered on a very limited number of premises lumber through the marketplace, dominating headlines and box office receipts. But at their feet, crowds of small, strange and ambitious works on the level of Boyhood and Snowpiercer scurry about.

In the shadows of the Grand Theft Autos, Far Crys, and various Calls of Duty, the variation and creativity in the videogame world is boundless. So yes, this year I played plenty of games where you shoot enemies, take over bases, assassinate guards, and blah the blah blah blah. 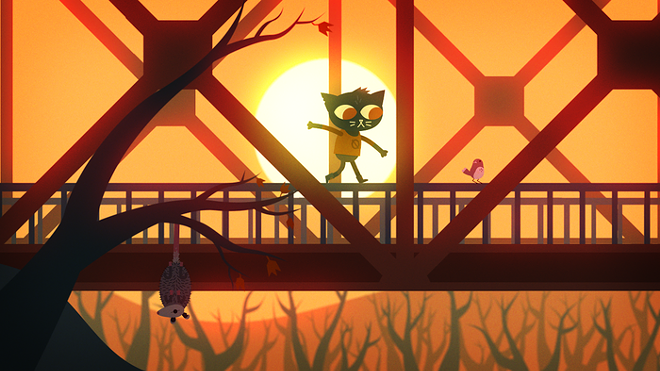 Night in the Woods
Play as Mae the cat in this beautifully-designed indie platformer coming out sometime in 2015.

There are a handful of characteristics that get me really, really excited about a video game. First, having a less-traditional art concept or style, which becomes even more enjoyable when paired with a lively story. Options of female playable characters always gets a thumbs up, and co-op games are great, too. But anytime a developer throws cats into the game world, I go nuts.

Which is why I am, quite literally, counting down the days until Night in the Woods is released. The narrative-driven, adventure/platforming game currently has a vague release date of sometime in 2015, and is set to be available on PC, Mac, Linux and the PS4.

Players explore Night in the Wood's game world through its main playable character, Mae the cat, a college drop-out who returns to her troubled mining hometown that's also filled with troubled youth. And there's something lurking in the woods...

The game's development was largely made possible to a massively successful Kickstarter campaign launched about a year ago that raised more than four times the team's original goal. That dev team is made up of Alec Holowka (another favorite game he's contributed to is Towerfall Ascension), Scott Benson and Bethany Hockenberry. Based on what we know about Night in the Woods, it shouldn't disappoint, even if you don't get amped up for a game with a playable cat character.

As independently created video games continue to exponentially grow in number, it gets harder and harder to sort through the noise to find something you'll love and that's worth the time invested. I have no way of knowing if either of these games will meet all of my ideal expectations outlined above. Like any form of entertainment — just because a trailer looks cool doesn't mean the game or film is going to rock.

Yet, based on what we know and have seen so far, I am incredibly hopeful about Night in the Woods, as well as another in-development game recently discovered on Steam's Greenlight system. Greenlight is intended to spur support from potential players of a to-be-released game, and also serves as a source of audience feedback for developers.

Another platformer/adventure style game, The Purring Quest also offers what looks to be some beautiful 2-D art. Described as a "stealthy" platform game, users play as Kimchi the cat, who's on a journey to find his sick owner. Along the way, Kimchi meets and gets to interact with a handful of Internet-famous cats: Henri, le Chat Noir, Nala, Cooper the Photographer Cat, Nora the Piano Cat, Oskar the Blind Cat and Tika, lead game developer Jose Gines Picon Lopez's cat.

In a recent interview, Lopez revealed his hope is to donate a portion of the game's sales to support animal welfare groups aiding the abundant stray cats in his hometown in Spain.

It's not known yet when The Purring Quest could be released, but trust that I'll be following the latest announcements about both of these projects.

How The Walking Dead can make you cry

A video game made me cry last night.

Over five chapters, The Walking Dead, made by thesame company that churns out so-so bunny detective Sam and Maxadventure, puts you in a shoes of an escaped convict taking care of alittle girl in the midst of a zombie apocalypse.

And it’s absolutely brutal. People die. Sometimes they die again. Other times they betray you or say things that make you furious or empathetic or downright devastated.

It’s not like media hasn’t made me tear up before. Sure, I got a bit weepy inthe series finale of Lost or that super-sad SouthPark episode where Stancoaches a pee-wee hockey team. Television is good at that. You spend enoughtime with the characters, that you almost see them as friends.

Video games, by contrast, do a lousy job of creating an emotional response.You shoot tons of dudes or robots and zombies and don’t feel a thing. If youmess up, you reload. Big deaths usually happen through cutscenes with stiltedcomputer acting, lousy writing, or interminably long translated-from-Japanesedialogue.

The game part of games, the reflex-based bullet firing or car racing, usuallyworks against the character development.

But The Walking Dead isn’t like most video games. You don’t killhundreds of zombies. Across five different chapters, you might personally kill25. You don’t solve excruciatingly difficult puzzles. Most of the time, thesolution to any problem is perched directly in front of you – all of you have todo is click.

Most of what you do is make decisions. You decide how to answer or askquestions, you decide which tool to grab off the wall. Sometimes you decide wholives and who dies, or who gets a limited supply of food when you’re hungry.

Those decisions do what books and movies can’t: They immerse you directly inthe story.

Most video games immerse you in the game — you directly control howmany pedestrians you hit with your stolen sports car – but then kick you outinto cutscene when the story starts. Here, that rarely happens. The story isthe game. If the game was more “fun” to play it would defeat that.

By making a character’s choices you begin to associate yourself with him. The results of those choices becomes personal. It somehow manages a deeper level of immersion.

You’re responsible for the little girl. Your actual choices are responsiblefor horrible things happening to the people you care about.

It’s one thing, on a TV show, to hear a dying person say their last words.It’s another thing entirely to get to choose them.

From your cold, dead (and presumably violent) hands

Alright, nerds. The day of reckoning is here. They've finally come to take your violent videogames away from you, wrenching the controller from your sausage-like, sticky fingers. Now, you must go out and …

Actually, there's nothing you can really do. Tomorrow, the Supreme Court will be hearing oral arguments for Schwarzeneggar v. EMA*, a case filed over California's quasi-controversial law limiting the sale or rental of "violent" videogames to minors. It's not the first case of its kind — several states have had laws banning the sale of violent videogames to chidlren struck down at the federal court level; this is merely the first that reaches SCOTUS.

Basically, the problem comes down to those age stickers they slap on videogames — E for everyone, T for teens, M for mature, etc. The law banned the sale of violent videogames to anyone under 18, and required labeling above and beyond the current system. Basically, if a “reasonable person” would find the game appealing to “a deviant or morbid interest of minors,” violated "community standards" on what a minor should see, lacks serious value and allowed the player to inflict injury through "torture or serious physical abuse" of a human-like figure, it fell under the law.**

Videogame companies, unsurprisingly, aren't too fond of what they deem government censorship. They argue that for a state to restrict speech in such a manner, it must have a "clear and compelling interest." California says violent video games cause violent children, but most*** studies have shown that's simply not the case.

The EMA has had groups varying from associations of videogame publishers to journalists to booksellers to movie studios to the RIAA weighing in its side, as well as collection of nine state attorneys general, including Washington's Rob McKenna. In the brief filed by the AGs, they say California's law would restrict free speech and lead to an "expensive new enforcement regime, in which law enforcement personnel would become culture critics … [depleting] resources and distract from law enforcement's task of policing actual violence."

Tomorrow's only the oral argument, so the Supremes won't have a judgment for a while. Here's an excellent rundown of background and what's expected to be argued.


* Don't worry, plenty of people have already jumped on the obvious "Hey, wasn't Schwarznegger in a bunch of horribly gory, violent movies?" bandwagon. Though it really doesn't make the law any less hypocritical. The MPAA system, which covers movies (G, PG, R, etc.) is a voluntary system, not enforceable by police. Exactly like the current system for videogames.
** Again, "prevailing community standards" could easily include Schwarzenegger movies.
*** Actually, all reputable studies that have been conducted show no correlation between violent media and violent children, though some make a case for "aggressive" or "risky" behaviors.