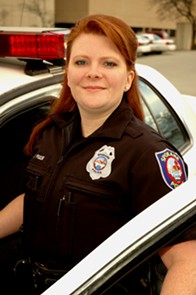 Penny Harrington, a former police chief in Portland, Oregon and founding director of the National Center for Women and Policing, told the Inlander that a culture audit could help reveal underlying attitudes, but the effort shouldn't stop there. Another essential strategy to combating sexism within any law enforcement agency, she says, is gender diversity.

To that end, we asked four regional agencies how many female officers they have. Here are their responses.

• Thirty-three of the 307 uniformed officers are female (about 11 percent).

• One female holds a rank of sergeant or above.

• There are eight female detectives and two female corporals.

• Ninety-five out of SPD's 387 total employees are female (about 25 percent).

Public Information Officer Teresa Fuller adds that those numbers do not necessarily indicate that women are passed over for leadership roles within the department. She points to Officer Jen DeRuwe, who is leading the department's youth activism initiatives as an example. Females have also been field training officers and instructors at the academy, both very important positions, says Fuller, who will lead the new public information team later this year.

• One female detective, who is also considered a corporal depending on her duties that day.

Deputy Mark Gregory points out that men typically apply to work in law enforcement, and of those that apply the county's Civil Service office weeds out those who aren't qualified before they reach the academy.

• Of the 80 sworn officers for CdA Police, women make up about nine percent.

Detective Jared Reneau says there are no efforts to recruit women specifically, but the department has hired three or four within the past couple years. "Lately we've had a number of really good potential applicants who are females," he says. "As a percentage of the total number of new hires, it's a significant increase."

• Six female deputies in the Sheriff's Office — four on patrol and two detectives.

• Ten female deputies in the jail

• One sergeant in the jail

• One lieutenant in the jail

• Major Kim Edmondson, the Jail Bureau Commander, is in charge of the jail.

In Harrington's experience, it takes a force made up of about 25 percent females to make a difference in culture.

"The percentage of women is a big factor in what's going on," Harrington says.

It would also help to hire an outside police chief, she adds. Since Frank Straub left SPD, Mayor David Condon assembled the Police Leadership Advisory Committee to allow community members to provide input on what they'd like to see in their chief.

The committee is scheduled to present their thoughts to the mayor today.