A Spokane police officer admits he had a sexual encounter with a woman he met while responding to a call of domestic violence, newly released records show. The officer, Chris Conrath, now faces a 30-day suspension.

The case comes at a tough time for the department, which has already been rocked by allegations of sexual harassment by its former chief and by rapes charges against one officer accused of assaulting a fellow cop.

Conrath and the woman first met on Sept. 7. She had called police saying her husband spit on her and left her “near a bridge” downtown after an argument in their car. Conrath responded, but found no probable cause for an arrest. Within five hours, the woman began texting and emailing Conrath saying, “I have to tell you, I can’t stop thinking about you” and “Just can’t hide my feeling. Can you call me back? I lost the number in my car.” 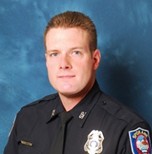 Conrath had initially responded to the woman that it would not be appropriate for him to get personally involved, but that didn’t last long. Two days after the woman’s initial report, the two met at the Japanese Gardens in Manito Park around 1 am while Conrath was on duty.

“There was a flirtatious nature to the way she spoke to me... You know, we’re kind of starting to go down that road, perhaps, where you know the smart thing to do would be break this off, wish her luck and leave, and I didn’t,” Conrath told investigators.

The two kissed before they parted ways that night, and the woman told Conrath that she’s staying at a hotel in the Spokane Valley. Conrath met her there when he got off work around 3 or 4 am.

Investigators determined that Conrath violated the department’s conduct unbecoming of an officer and nepotism and conflicting relationships policies.

“The purpose behind a policy articulating a department prohibition between officers and victims is obvious,” investigators write in the Internal Affairs report. “‘The ‘knight in shining armor’ presented to a crime victim looking for just such an illusion provides a susceptibility for an officer to take advantage of a victim’s emotional weakness and purport to fill that gap and that role. Additionally, police officers, by virtue of their position and authority, have access to databases … not available or known to a victim, which can be used to accentuate or perpetuate the ‘knight in shining armor’ image for personal gain.”

“Yeah, I was sort of flirting with disaster,” Conrath told investigators. “Yeah I acknowledge that.”

In a letter to Conrath notifying him of the sustained policy violations, Interim Chief Rick Dobrow writes: "Sound decision making and judgment are critical for members of law enforcement. Both of these traits were called into question in this incident. Please take this as an opportunity to learn from your mistake and never repeat this behavior."