A Half-Century of Fun

At 50, the Sinto Senior Center has no plans to retire 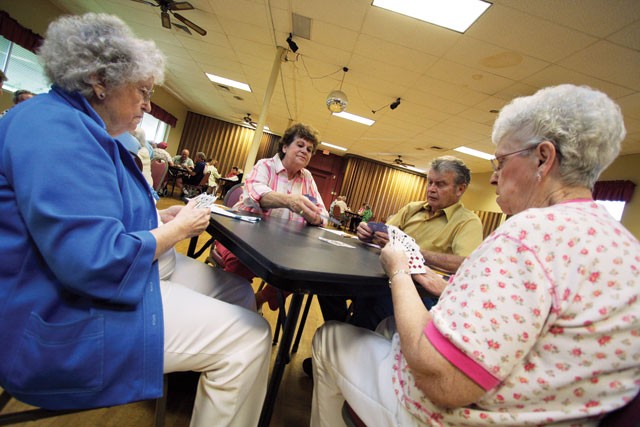 Young Kwak
Pinochle has been a constant at Spokane's first senior center.

If it were a person, on Sept. 21 the Sinto Senior Center would finally be old enough to join the AARP. Fifty years ago, a group of seniors wanting someplace to socialize purchased an old phone company building at 1124 West Sinto Avenue, board member Joanne Shaw relates.

The resulting organization was the first senior center in Spokane, and the second in Washington state. The purpose was simple: Give Spokane’s older citizens a place to socialize, recreate and make new friends. To achieve that, the Sinto Center offers a wide variety of activities and opportunities: bingo; cribbage; a nutritious lunch served four days a week by Meals on Wheels; the occasional session of drivers’ ed to help seniors with savings on insurance premiums.

Did anybody say pinochle? Oh, the many, many rounds of pinochle. At least four days a week. “I personally play pinochle on Sundays with two 97-year-olds,” Shaw says. Despite their age, Shaw’s pinochle partners remain exceptionally healthy and aware. “I really think a lot of that’s due to the camaraderie of the organization,” she says. “The stimulation of the cards — you have to count and think what you’re going to do — and the socialization are all very, very useful.”

As photos fade, friends and spouses pass away, and children grow up, move out and get married, many senior citizens find their earlier busy lives supplanted by loneliness. No scampering, screaming kids, no ringing phones, no surprise visits from neighbors — only the tick-tock, tick-tock of the grandfather clock in the living room. According to a study from the University of Michigan, more than 60 percent of seniors over 70 experienced social or emotional loneliness.

That loneliness comes coupled with a host of other health risks. A study in the journal Psychology and Aging found that as loneliness increased in senior citizens, blood pressure shot up by almost 30 points. Loneliness, the study said, was as significant a factor in blood pressure, as exercise, weight and diet.

Senior centers like Sinto provide an alternative to simply remaining at home, bored and lonely. “A lot of them would just sit around home and watch TV and waste their lives,” board president Pat Wilson says.

Instead, Sinto gives seniors a sense of community. “You meet new friends,” Wilson says. Sinto residents eat out together, have birthdays together and go on vacations together, with cruises around Ireland, the Mexican Riviera, New England, and closer to home, on Lake Coeur d’Alene.

Even the landlubbers at Sinto regularly go on road trips. Recently, they went on a three-day cross-state excursion to see a Mariners’ game in Seattle. For those with the urge to roll the dice, once a month Sinto has casino night at Two Rivers.

Activity — both mental and physical — is vital to seniors. Researchers at the University of Kansas School of Medicine found that physical activity slowed the brain-atrophying effects of Alzheimer’s. Wilson, who is 80, knows this. “It’s important to keep your mind active,” Wilson says. An eight-year study published in the American Journal of Epidemiology discovered that engaging in a variety of activities, regardless of how strenuous they are, helped to delay dementia.

The seniors at Sinto purposefully remain active. Like many senior centers, they hold competitions tracking the number of miles walked, with the promise of trophies waiting at the end for the winners. And those activities are varied. One day the seniors might be watching Alvin and the Chipmunks or a travelogue on Rome; on the next, they may shoot some pool or play a no-holds-barred game of pinochle.

“The goal is just to have people come and enjoy themselves,” Wilson says, “and provide an environment to help seniors keep active in mind, body and spirit.”