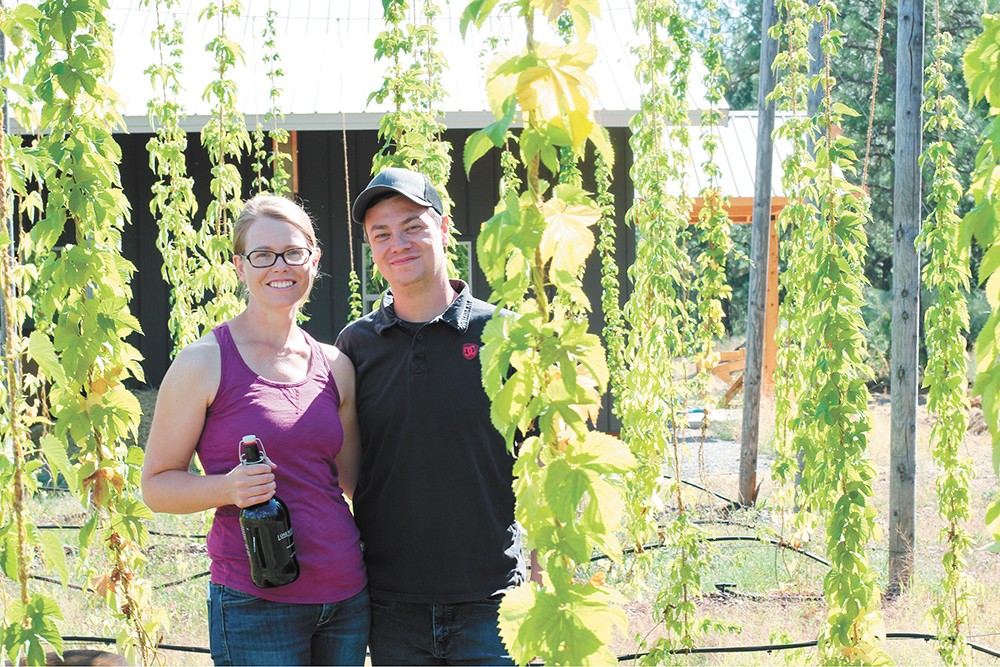 Farmers Luke and Emily Black have been going it alone on many levels, but it's their vision of a farm-based brewery that sent the owners of Lone Mountain Farms venturing into unknown territory.

Named for nearby Lone Mountain Road, the Blacks' six-year-old farm between Rathdrum and Athol is a reflection of the couple's unique backgrounds, interests and skills.

Emily, who grew up on a Montana ranch and says the garden is her "happy place," is parlaying her expertise in marketing with a new side venture to help farmers navigate online sales and promotion. Luke, who spent his childhood on his grandparents' Rathdrum farm, channeled his computer programming abilities to design an app that directs garden watering, and yet is most excited about growing hops and grains.

"From the surface, there were seemingly insurmountable obstacles in obtaining the proper permitting to have a brewery on the farm and that really stopped the idea from getting anywhere," Luke says.

Last year, however, he did the math on his hops-growing enterprise and was depressed to find he was only making around $1.50 an hour.

"That was really the catalyst for me to start on the brewery idea, so we could market our hops and grains directly to consumers."

While more and more people were saying "yes" to Lone Mountain Farms' garden output — they offer a veggie community-supported-agriculture (CSA) box, sell through LINC Foods and are a staple at the Kootenai County Farmers Market — the Blacks had to get used to hearing "no" from the myriad entities involved in regulating Idaho's liquor laws.

"There wasn't really any reference cases of farms doing exactly what we were wanting, so every agency said no initially," says Luke, who's the brewmeister for the farm's one-barrel operation.

Unfazed, they approached the problem from another angle, patiently illustrating how they were, in essence, an estate winery, which in Idaho means being able to sell what you produce on site, as well as distribute what you make.

After the initial OK, Luke says, licensing took another six months, during which they started building the 2,100-square-foot metal structure that would house the brewery, a shop, a tasting area that doubles as a farm stand and an office for Emily's marketing business.

In July, the couple finally got their license and — fingers crossed — plan to open the farm to the public on Saturday, Oct. 5, offering market produce and beer in growlers, eventually adding 16-ounce cans.

Their beer list is set to include year-round brews like the Forager, with orange mint, rosemary and fir tips, and seasonal offerings that follow what's happening on the farm. The couple made a lavender raspberry stout, for example, earlier in the year, followed by a kale pale ale. A zucchini chai brown featuring chai from local mobile coffee company Coffee Roboto is in the works.

Another unusual component of Lone Mountain Farms' offerings involves Luke's interest in dryland grains. Surrounded by deer-proof fencing, much of the farm's acreage is dedicated to grain trials for such unusual varieties as rouge de Bordeaux, which is ideal for breadmaking and Egyptian black barley.

"Our goal is to find what grows well, is not irrigated and has a lot of flavor," Emily says. ♦