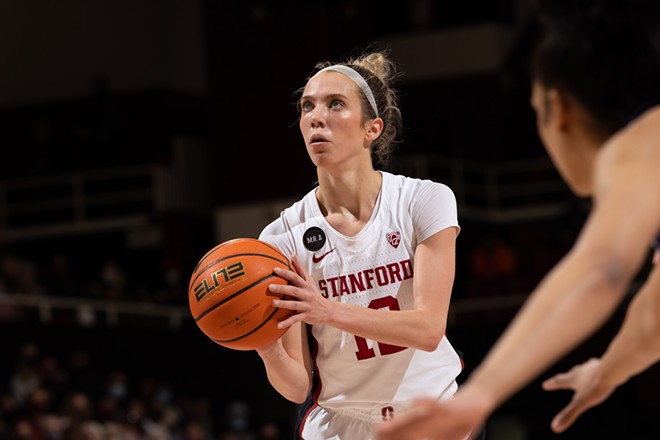 Madness is about to descend

on Spokane. The NCAA Women's Basketball Tournament heads to town this weekend for three big-time games that will send one squad to the Final Four.

After the opening weekend of tourney play, the Sweet matchups for Friday at Spokane Arena are set:

Before checking out the action at Spokane Arena this Friday and Sunday's Elite Eight matchup of the winning squads (6 pm), here's what you need to know about each of these Sweet squads.

It's safe to say Lexie Hull wanted to come home.

Stanford's senior guard and former Central Valley High star put up a career high 36 points to turn the Cardinal's Second Round game against Kansas into a blowout. Even sweeter? She'll be returning to Spokane alongside her twin sister, Lacie, who also starts in the backcourt for the defending national champions. The NCAA Tournament Regional won't be the sisters' first trip back to the Lilac City this season, as the Cardinal squeaked out a 66-62 win against Gonzaga at McCarthy Athletic Center back in November.

To say Stanford is star-studded would be a wild understatement. Improbably, the twins might be the least recognizable members of Stanford's starting lineup, which features First Team All-American and Pac-12 Player of the Year Haley Jones; graceful yet towering leading scorer, rebounder, and shotblocker Cameron Brink; and tenacious guard Anna Wilson (sister of NFL quarterback Russell Wilson). And that's not even mentioning 6-foot-1-inch reserve forward Francesca Belibi who threw down a rare women's dunk in the First Round blowout of Montana State.

As the defending champs and top seed, Stanford has every right to believe this is their region to lose. The team went undefeated through the entirety of the always-brutal Pac-12 slate. Their only three losses came by a combined 12 points to top-tier teams, with their most recent defeat coming in late December to fellow 1-seed South Carolina.

It seems all set up for the Hull sisters to have their storybook ending in Spokane by cutting the nets and heading to another Final Four.

The Terrapins' relentless balance makes them a formidable foe with a high floor. They're led by 3rd Team All-American forward Angel Reese, who averages a double-double (17.4 ppg, 10.7 rpg), but all five Maryland starters average double figure points per game. And that's before even getting to guard Shyanne Sellers — the Big 10 Sixth Player of the Year — coming off the bench.

They easily dispatched Delaware and super fun underdogs Florida Gulf Coast scoring a whopping 191 points in two games, led by guards Diamond Miller (47 points) and Ashley Owusu (44 points). Knocking out the defending champs still would be a major upset — especially considering Stanford blew out Maryland earlier in the season by a score of 86-68 — but theoretically the Terrapins have the scoring firepower to make it a game... if they're firing on all cylinders.

Sporting one of the country's best stifling defenses, Texas makes opposing offenses work to score on them. Just ask the Utah Utes, who were the No. 1-scoring offense in the high-powered Pac-12 conference but were only able to put up 56 points (20 below their average) in their second-round loss to the Longhorns. But don't sleep on their offensive power either — Texas ended the first half against Utah making 10 straight shots.

The Big 12 champs also aren't going to be afraid of the top seed, having already knocked off Stanford at Stanford 61-56 back in November. While freshman point guard Rori Harmon has showcased two-way starpower, Texas is a true team that lets disrespect of them as individuals fuel their Ws — somehow the conference champs had zero players on the First Team All-Big 12, despite the list going 10 players deep. Riding a 13-game winning streak headed into the Sweet 16, nobody wants to play Texas right now.

The one surprise in the Spokane Region, the Buckeyes do have the ability to light up the scoreboard. The sixth-ranked scoring team in the country looked shaky while squeaking by Missouri State in the First Round, but the offense woke up two days later, as OSU put up 79 points to take down the LSU Tigers on their home floor and reach the Sweet 16.

Guard Jacy Sheldon leads the way for the Buckeyes, averaging 19.8 points per game, but the key to pulling an upset versus Texas will be the deadeye shooter Taylor Mikesell. The senior guard is second best 3-point shooter in the country by percentage, sitting at an astounding 47% from behind the arc. In order to keep the Buckeyes dancing, Mikesell likely needs a show-stopping barrage from deep. ♦

The original print version of this article was headlined "Truly Hooptown"

It takes two to lead a deep run in March, and luckily the Zags have Drew Timme and Andrew Nembhard