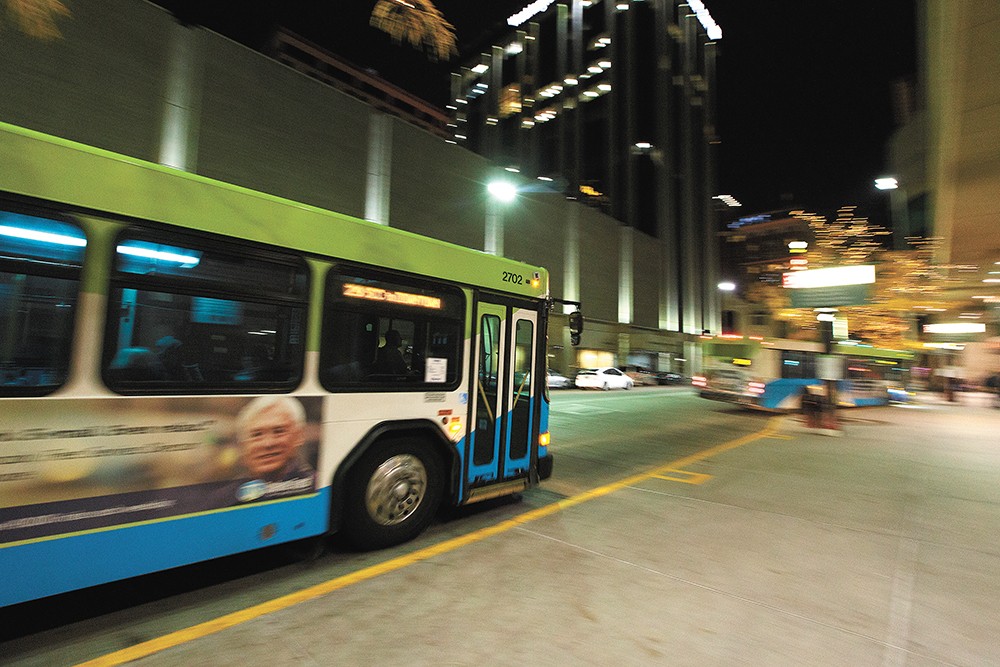 this month. But the day before the election, E. Susan Meyer — the Spokane Transit Authority CEO who's pictured on the cover of this week's Mass Transit magazine — took an action that the transit agency estimates could cost it as much as $50,000 in revenue.

She fired Ooh Media, the Spokane advertising firm run by Ted Carroll, which for six years had been selling and installing the advertising on the sides and interiors of STA buses.

"It's a terrible disruption," Meyer says about terminating Ooh Media's contract. "But it is a disruption that is more acceptable to us than the alternative of him continuing to misrepresent the board's ad policy."

The sides of buses, it turns out, have become battlegrounds where wars over freedom of speech are waged. More than once, STA has been caught in the crossfire.

It started with the idea that God doesn't exist. "Are you good without God?" the United Coalition for Reason ads on the side of STA buses in 2011 read. "Millions are."

It was a relatively innocuous statement compared to infamous bus ads elsewhere — like the ones calling Muslims "savages" or tying the Koran to Hitler or claiming that abortion causes breast cancer. But in Spokane, the reaction to the atheist ads was intense.

"We had bus drivers who were hearing it from customers. And bus drivers who didn't want to drive the buses that had that ad," Meyer says. "People called me, and said, 'Susan, how can you take these ads?!'"

Meyer says Carroll — who did not respond to repeated requests for comment — made a mistake in how he dealt with the ads: He'd initially rejected them, claiming they were offensive because of the pro-atheist content.

The rejection drew fire from the Coalition of Reason's lawyer. Without a specific policy barring such an ad, a public agency like STA legally had to slap it on the side of their buses, or risk being sued for viewpoint discrimination.

"I didn't like it, but it didn't matter what I liked. Our policy allowed it," Meyer says. "I told Ted, 'You need to take those ads."

The controversy sparked a change. In 2012, STA's board altered its ad policy, adding a ban on "advertising expressing or advocating an opinion, position, or viewpoint on matters of public debate about economic, political, religious or social issues."

While the First Amendment doesn't allow viewpoint discrimination, STA, like other transit agencies, argues that they are allowed to ban certain categories of ads.

The U.S. Supreme Court has ruled that government agencies can't restrict political signs, any more than nonpolitical signs, in public forums, but transit agencies have argued that the sides of buses are "limited public forums," where greater restrictions are allowed. While the 9th Circuit recently allowed bus ad restrictions in Seattle, other circuits have come to different conclusions, and the Supreme Court has refused to settle the debate.

So for now, details are crucial. STA's new policy allows churches and controversial nonprofits to promote their services, but not their ideologies. So an advertisement pushing for abortion rights wouldn't be allowed under the new policy. But STA has allowed an ad calling Planned Parenthood "honest education" and an "exceptional champion," complete with a "PROUD" rainbow button symbolizing Gay Pride Month.

"We wanted to stop having controversy over bus advertising," Meyer says.

But this year, that's not what happened.

Driving to work in July, Meyer spotted it on the side of an STA bus stopped at a stoplight: A big red advertisement from the United Food and Commercial Workers union, imploring workers to "GET UNITED!" and unionize.

She was horrified. An ad urging unionization was a violation of the new ad policy — and she says it wasn't an ad that Carroll had thought to send to STA to double-check. STA had the ads pulled down, and UFCW wasn't charged for them.

Scott Habenicht, attorney for the local UFCW, says that on two occasions before the new ad policy went into effect the UFCW had run STA bus ads.

"What sticks in our craw is the ultimate determination was that we couldn't advertise because we're union," Habenicht says. "There are free speech implications here. The union's voices are being silenced."

That's what Meyer was afraid of when the ads were pulled.

"It could create a perception that STA is anti-union," Meyer says. "And that couldn't be further from the truth."

She says the problem was the ad's union-organizing message — a matter of public controversy — not the union itself.

"There is no blanket 'no' on any organization," Meyer stresses.

The next month, the problem just got worse: STA's bus drivers' union wanted to put up their own ads. But Thomas Leighty, president of the local Amalgamated Transit Union, says that Ooh Media incorrectly told them the union couldn't advertise because of its nonprofit status.

That's when the ATU brought in the lawyer for its international organization: In September, the union sent over a draft of a potential lawsuit.

"They said, this is what we will file if you don't take our ads," Meyer says.

STA responded by asking to see the proposed ad. Leighty sent over a crude mockup ad done in Microsoft Paint: "Do you drive: Uber? Lyft? Charter bus? School bus? You have the right to organize! Contact ATU 1015 today."

This wasn't the sort of ad that STA policy allowed, Meyer says. But Carroll thought otherwise. "His last message to us was that he said he thought the ads were fine," Meyer says.

That, Meyer says, was the last straw. STA had been working with Ooh Media since 2009, when STA says it fired its previous ad contractor, Gateway Outdoor Media, for refusing to pay what it owed. Meyer says Carroll had been successful in generating about $200,000 a year in revenue for STA.

She knew that Carroll losing essentially his only client would be devastating to Ooh Media, but felt she didn't have a choice, and fired them.

STA won't be asking for a new advertising contractor until mid-2017. Until then, the existing ads will finish up their runs, more buses will go ad-free, STA will lose out on potential revenue and ATU will continue to wait for its opportunity to bring forth its legal challenge.

"We have a First Amendment right to inform the public," Leighty says. "If we're told 'No, we can't advertise on buses,' we'll file the lawsuit." ♦