An environmental study for the proposed PacWest silicon smelter is on hold, but company leaders say it's not due to market woes 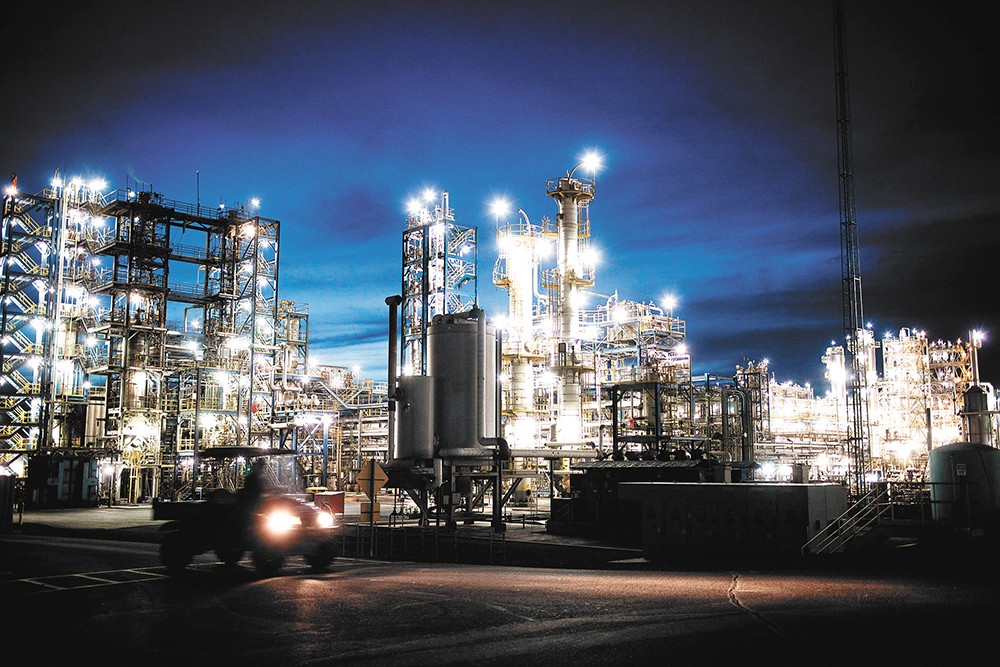 REC Silicon Inc. photo
REC Silicon in Moses Lake warns trade disputes with China could force it to shutter, but another project in Newport is still in the works.

It hasn't exactly been a good year for some U.S. facilities producing silicon materials that get used in everything from solar panels to computer tech.

In July 2018, REC Silicon in Moses Lake, which produces polysilicon for solar panel manufacturing, laid off about 40 percent of its workforce, citing ongoing issues stemming from large tariffs China put on their product in 2014. Since last summer, the facility has been running at only 25 percent of capacity.

In the months since, the company has offered a roller coaster of announcements, declaring in February it would shut the site by March 1, then announcing it would actually stay open while trade talks with China continued. In April, REC again announced that it would start shutdown work in Moses Lake by May 15, with a complete mothballing of the facility possible by the end of June if nothing changes.

"There will be a very large impact to the community. REC has a very large jobs multiplier," says Emily Smith, business recruitment manager for the Grant County Economic Development Council. "For every [REC] job, over five jobs are created in the area. So the total amount of jobs that would be lost is about 974."

Across the country in New York, a silicon smelter in Niagara Falls abruptly closed at the end of December. Each year, that two-furnace facility can make up to 27,000 tons of silicon metal, a material necessary for processes like the one at REC. Ferroglobe PLC announced it would close that smelter due to unfair competition from subsidized companies that have been dumping silicon into North America's market, according to the Niagara Falls Reporter.

"Australia, Brazil, and Norway were dumping by selling below cost," Niagara Falls Mayor Paul Dyster told the Niagara Reporter, which noted there is also subsidized competition from Kazakhstan.

Meanwhile, the environmental study for a proposed silicon metal smelter in northeast Washington has been put into a holding pattern.

Project backer PacWest (owned by HiTest Sand Inc. of Alberta) and the state Department of Ecology both felt that the one qualified bid submitted for the environmental consulting work for a required study was too high. The state agreed to put the work back out to bid, but is currently waiting for a go-ahead from PacWest before doing so, says Brook Beeler, director of Ecology's eastern regional office.

That means the timeline, which originally called for a draft environmental impact study to be done by summer and finalized by the end of 2019, will be delayed.

But all of that seemingly bad news doesn't mean the PacWest smelter proposed to go in near Newport is in danger yet.

In fact, the demand for silicon metal in the North American market is as strong as ever, says Jayson Tymko, president of U.S. operations for HiTest. While things haven't worked out well for REC, that isn't the case across the board, he says.

"Demand is increasing in North America significantly," Tymko says. "It's actually getting better for us."

The majority of the woes for REC Silicon stem from a trade war that started years ago.

In September 2018, bipartisan members of Congress from both Washington and Montana — where REC has another facility that produces silane gas — wrote a letter to the Trump administration, urging action in ongoing trade disputes with China.

"The impact of this Chinese retaliation has been devastating to the U.S. polysilicon industry."

Back in 2012, the letter notes, the Obama administration tried to strengthen U.S. solar manufacturing by implementing tariffs on imported Chinese solar panels. But that backfired when China retaliated with a 50 percent tariff on American polysilicon, which is used to make semiconductors and solar panels.

"The impact of this Chinese retaliation has been devastating to the U.S. polysilicon industry, which has shed thousands of jobs since China announced tariffs in 2014," states the letter, signed by Sens. Maria Cantwell, Patty Murray, Jon Tester and Steve Daines, as well as members of the House of Representatives from both states. "It is imperative the United States obtain a permanent and positive resolution for U.S. polysilicon companies like REC Silicon."

In February, it looked like REC Silicon would shutter the Moses Lake facility, but in early March the company decided to keep the doors open because U.S. negotiators had made American polysilicon a priority in trade talks with China, REC Silicon Vice President for Business Development Francine Sullivan told the Columbia Basin Herald.

"It's very good news," Sullivan told the Herald. "It's good that President (Donald) Trump has prioritized us."

But by April, the company again warned it would close, with shutdown work scheduled to start in mid-May, and the facility potentially left dormant by the end of June.

"The majority of companies that use polysilicon to make solar panels are located in China," explains Smith with Grant County Economic Development Council. "This whole time they've been searching for other avenues, but it's hard when the basis for that industry is located in China."

Part of the sell that HiTest/PacWest has made for its smelter near Newport is that the silicon metal it produces could be used by facilities like REC to ultimately go into solar panels.

But while it's disappointing to see what's happening with REC, Tymko says, the Moses Lake facility would ultimately represent a very small portion of the PacWest smelter's customers.

Others have invested millions in their facilities, he says. That, coupled with demand in North America being thousands of times more than current supply, leaves PacWest feeling good about future demands for its product. If REC stays closed, it could mean more of PacWest's silicon metal would go toward computer applications than for solar panels, Tymko says.

But if things are looking up, why delay the environmental study?

"The bid was more than double what even Ecology was expecting," Tymko says. "We thought, 'That's ridiculous.'"

While working with the state on its options, the company has also been coordinating with Pend Oreille County, as the site purchased for the smelter is currently zoned as public land. That needs to change before the other work can move forward, Tymko says.

Community groups that oppose the smelter, including Citizens Against Newport Silicon Smelter (CANSS) and Renewable Growth Northeast Washington, have pushed back on the county level. Most recently, the residents who make up those groups have been lobbying decision makers not to rezone the county's public lands, citing environmental concerns from the smelter, which would be one of the largest polluters in the state.

The county, which proposed the amendment, has said the zoning change would end a problem where public land that is sold to private owners can't be built on. All amendments for the comprehensive plan go through the planning commission before a vote is taken by the county commissioners, who could still vote in favor of the public lands amendment, despite the recommendation not to.

The Pend Oreille board of commissioners plans to hold a public meeting on the zoning changes on May 22 at Newport High School.

Until the county makes its decision, PacWest plans to hold off restarting the environmental study.

"The county has missed several proposed deadlines. They laid out a strategy and a timeline and they keep pushing it back," Tymko says. "We've kind of taken the stance, 'Well, let's not even look at these [revised timelines], let's wait till you've accomplished the end goal. Then we will start everything else.'"♦

The original print version of this article was headlined "Holding Pattern"