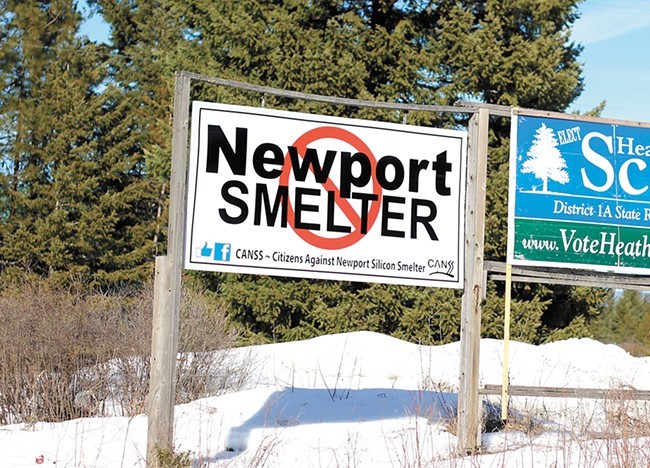 Quinn Welsch photo
An anti-smelter sign near the site of the proposed smelter.
Two groups opposed to a proposed silicon smelter in Pend Oreille County have filed a lawsuit against the county, Pend Oreille Public Utility District and HiTest Sand, the company behind the proposal, alleging a parcel of public land was illegally sold to the company for the project.

The complaint, filed in Spokane Superior Court this week, claims that the Pend Oreille Public Utility District illegally bought a parcel of land from the county to sell to HiTest along with three other parcels it already owned and had declared surplus.

State law dictates how public agencies can buy land and what purposes it may be for, and the groups allege that buying the land with the sole purpose of selling it to a private company was not an allowed use.

The groups who filed the suit are Citizens Against Newport Silicon Smelter or CANSS, Responsible Growth *NE Washington (or RG*NEW), and multiple county residents who are longtime customers of the public utility district.

“Pend Oreille County tax paying citizens had to file a legal complaint against their county in order to have a voice regarding life-altering decisions made by those whom they felt were trustworthy by voting them into public office,” says CANSS Chair Deborah Barker, in a news release about the suit. “Pend Oreille County sold property to the PUD, with full-knowledge that it would simply be passed-through to HiTest by the PUD for the planned smelter.”

The groups have made it clear for months they are unhappy with the proposal, and this spring sent letters to the county agencies and HiTest, a Canadian company, demanding they unravel the land deal or know they'd face legal action. After not getting the action they wanted, the groups filed the suit.

The project would site a silicon smelter on a northeast Washington property right on the Idaho border. Extremely high-temperature furnaces powered by more than 100 megawatts of electricity would melt quartz rock to produce about 66,000 tons of silicon metal there per year. That would be sold to other companies to be further refined and used to make everything from solar panels to aluminum, chemical compounds, computer chips and more.

Questions about the more than $325 million project have come from people who live close by, as well as others who live along possible trucking or rail routes in North Idaho, many of whom point to emissions, pollution and issues with other silicon smelters as cause for concern.

HiTest promises about 150 jobs at the site, and has said it will follow all environmental regulations required to prevent things like acid rain, but the neighbors still don't want the project to move forward.

The Kalispel Tribe also has adamantly opposed the smelter and sent letters to the county and state alleging that at least some of the $300,000 in public funding provided to the "project of statewide significance" from the state Department of Commerce has been misused and should be reclaimed.

This post may be updated if the Inlander hears from the involved parties.