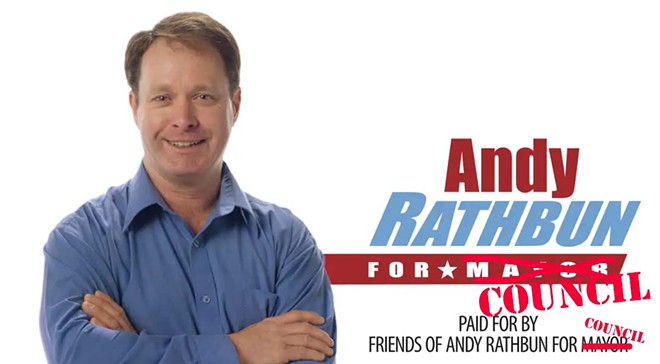 Andy Rathbun, to be clear, still believes he'd be a great mayor.

"I still think I’m an extremely qualified candidate for mayor," Rathbun says. "I think I’m more qualified than a lot of the other candidates who are running."

But while Rathbun could boast experience with U.S. Air Force, the Washington Air Guard, and the West Central Neighborhood, he knew there was one big thing he didn't have: name recognition. Running against a long list of mayoral candidates that included the City Council president, a firefighter, and a former news anchor, it was easy to get lost in the shuffle.

So after talking to friends, family members and other people he looked up to, he decided to shift course: He's pulling out of the mayoral race and choosing to challenge Karen Stratton for City Council instead.

"The original reason I didn’t consider the City Council, is I was afraid I would just be the one voice," Rathbun says. "I thought I wouldn’t be able to affect any change there."

But he's changed his mind, he says. Rathbun believes he'll be able to work with those who may disagree with him on council.

Besides, he says, many of the problems he sees with the city he blames on the City Council.

"They’re too focused on things that they really can’t affect and they’re too dramatic," Rathbun says. "They do vanity legislation. They just waste a lot of time."

As an example, he cites the legislation, vetoed by the mayor, to officially open up City Hall and other city buildings to the public, including the homeless. Considering the City Hall was already open to everybody, he says, it was a pointless piece of legislation. He says the city should have spent that time addressing the root causes of the homelessness issue instead.

"A lot of time was wasted," Rathbun says. "I’m an action guy. I want things to happen. I don’t waste time."

(As evidence that he cares deeply about time, he notes that he has over a dozen clocks, from all over the world, all over the main floor of his house.)

Like many critics of the city, he feels that the city's strategy of combatting homelessness hasn't been an effective one.

"They’ve spent so much money on this homeless issue, and it affects such a small portion [of people]," Rathbun says. "I’m worried more about the good hard-working people raising their families. That’s the 99 percent instead of the 1 percent."

He argues that the Housing First model, where homeless men and women are given housing before they're treated for factors like drug addiction and mental illness, isn't working.

"You can't just give housing to someone and not take a look at why they're homeless," Rathbun says.

But Rathbun struggles to get specific about what should be done instead. One solution he does praise is the Frontier Behavioral Health program that pairs social workers with law enforcement.

"These people are professionals. They’re able to assess a person almost immediately," Rathbun says. "They actually have good data that shows that it's working."

Rathbun has also raised concerns about proposals to expand rights for tenants. As the owner of 10 properties himself, he says concerns about these proposals have led him to begin converting some of his properties away from traditional rentals and into Airbnbs.

Rathbun isn't the first mayoral candidate this cycle to pull out of the race and run for another position. In 2016, mayoral candidate Ben Stuckart announced he would no longer be running for mayor, and would instead run against Rep. Cathy-McMorris Rodgers for Congress. But he later abandoned that race — due to family issues — before returning to the mayoral race.