Ang Lee's Gemini Man gives us two Will Smiths for the price of one, but forgets to tell a story anyone would care about 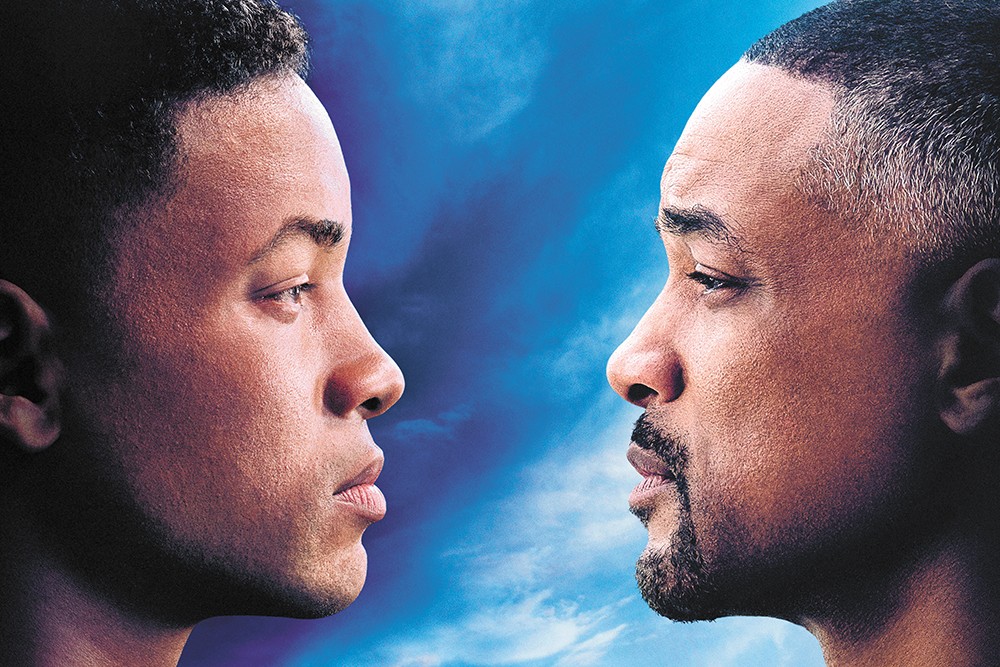 Will Smith and Will Smith star in the disappointing Gemini Man.

Fifty-something badass military sniper Will Smith goes up against the 20-something clone that he never knew he had, who is more wiseass than badass. It's like someone in Hollywood was pining for a 1990s-era marquee-worthy name and figured, "Hey, why not jumpstart the next horrific trend in movies and get on with creating virtual actors so we never have to hire an actual human being ever again!"

So they digitized and de-aged 50-something Will Smith, and apparently they told the actual 50-something Will Smith that he would be co-starring with the very CGI version of himself that is going to replace him someday soon. Smith will get royalties on his digitized self, probably, but soon they won't even need an original human to copy. Our movie stars will be constructed entirely of invented pixels, and then we'll be sorry.

To be clear, this is not Alita: Battle Angel, with its real-fake big-eyed faux-anime heroine. We are meant to take de-aged young Will Smith as wholly organic, as an authentic and fully biological homo sapien... and for the most part, that works here. There's very little uncanny-valley stuff happening in Gemini Man. Which is ghastly in its own way. Might as well go ahead and get our own jumpstart on writing the future history of cinema and call Will Smith "the Last Movie Star."

Anyway, no movie has ever been more high concept than this. No movie has ever been sold to us, and then delivered to us, more solely on its high concept alone. There is quite literally nothing to Gemini Man that isn't "Will Smith versus Will Smith, OMG! Cool!" (It's not that cool, actually.) And yet somehow the script — so anemic it should be dead — takes fully more than half of its runtime to get to the "revelation" that what is going on is precisely what we knew was going on even before the film began.

We wait for a solid hour-plus as old Will Smith's Henry Brogan wonders just who could it be, this mysterious young whippersnapper who is trying to kill him. (It's another you, dude.) We wait to find out why whippersnapper Will Smith has been sicced on older Will Smith by black-ops honcho Clive Owen (in one of the embarrassingly worst performances of his career). That we never learn.

But, hey, maybe there will be some exciting exploration of the nature-versus-nurture debate, the idea that DNA is not destiny, and it's how we are raised that matters more to what sort of person we become. There's a potentially intriguing sidebar here about how older Henry has a fear of drowning, acquired through a traumatic childhood experience around learning to swim, that his young clone does not have, because the clone didn't have the same experience as a child. This seems ripe for exploitation, somehow, in a big action sequence... and it never happens.

Making matters worse, this bafflingly awful, completely wasted storytelling opportunity comes via usually visionary director Ang Lee (Life of Pi, Brokeback Mountain), who does little but tread tedious spy-action water. The supporting cast is wasted — see: the excellent Mary Elizabeth Winstead, as Henry's unwitting sidekick — and there's nary a single plausible relationship developed; the most believable one is between Benedict Wong's even-more-sidekick-y pilot and the lovely Gulfstream jet the film deploys for a redundant detour to Budapest. All that's left is Lee's goofing around with a high-frame-rate format that delivers (in some cinematic presentations) an empty story in a visually razor-sharp IMAX that is pointlessly ultrarealistic. It's like looking through a window beyond which there is nothing worth seeing. ♦

The original print version of this article was headlined "Double Trouble"

Gemini Man is not showing in any theaters in the area.