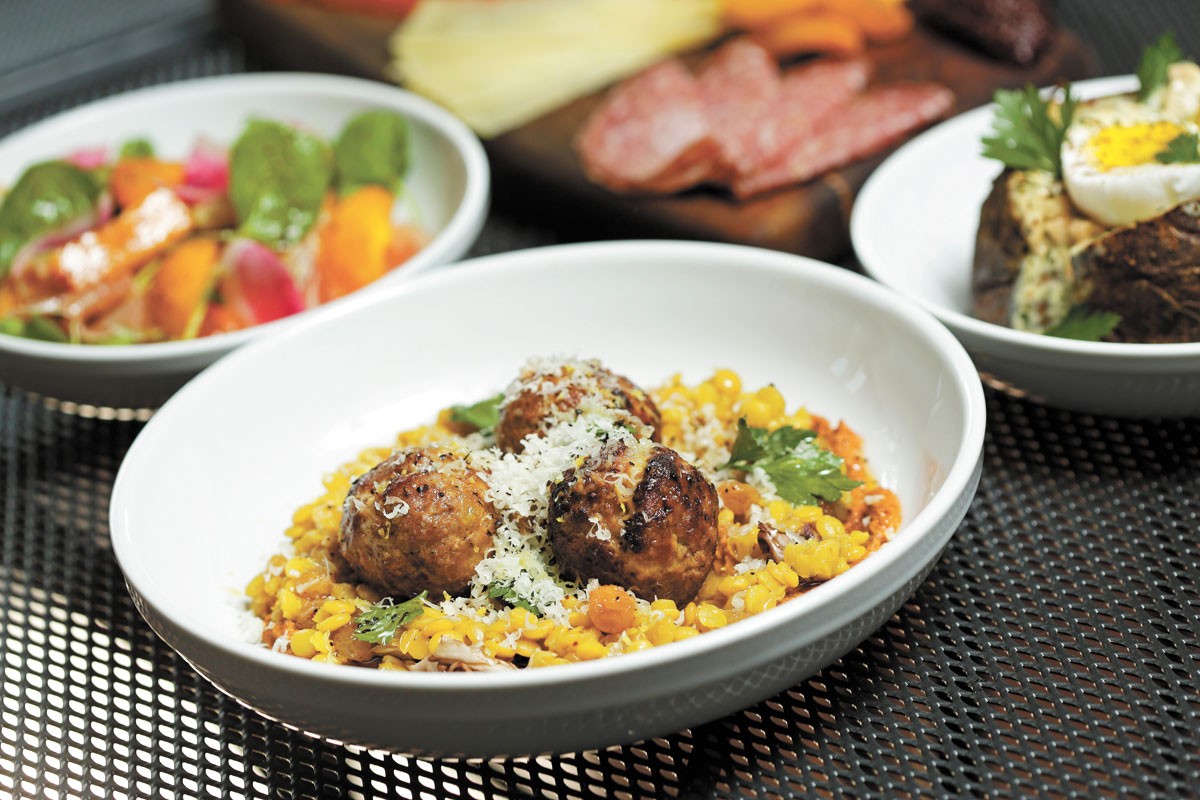 An escape to the scenic and historic grounds of Arbor Crest Wine Cellars in northeast Spokane is now even more akin to a transcontinental trek to Italy's iconic Tuscany region.

The complete new menu is currently available to guests age 21 and over by reservation only, with seatings offered Wednesday through Saturday from 5 to 8 pm unless the estate is hosting a private event. At times when the full dinner menu is not available, guests can still order hummus, charcuterie and fruit platters from the tasting room.

"This property has a Mediterranean vibe to it, and I wanted to touch on flavors extending from Greece, Turkey, Bulgaria all the way to Italy and Spain, so I wrote a menu that I thought would fit," White says.

Included on the new menu are suggested wine pairings for each dish. The hummus and fungus, a house-made spread with local mushrooms ($8), for example, complements Arbor Crest's pinot noir. For the bone marrow ($16) entree with herbs, roasted potatoes and beets, try the Avansino red blend. The apricot salad ($9), meanwhile, is elevated by the winery's rosé or Sangiovese.

"We spent a lot of time really going over the menu and what pairs well, and how to communicate that to guests," White says.

Since the new menu's debut, Arbor Crest is no longer allowing guests to bring their own picnic foods to the winery. For its popular summer concert series, which has been on hiatus so far this year due to the COVID-19 pandemic, the winery plans to eventually operate its own outdoor food stations in place of the local food trucks it's hosted during those events in past years.

"Some of the food guests can expect is a kebab station," White says of the plan for such large events. "We'll be making shish kebabs over charcoal and serving it with tzatziki and crudo, and we'll have a hummus station."

A photo tour of Arbor Crest

T he collaboration with Arbor Crest is one of White's first forays in the area outside of his own restaurants — downtown ceviche counter Zona Blanca, two locations of High Tide Lobster Bar, and the food side of TT's Old Iron Brewery & Barbecue in Spokane Valley — as part of a focus on his new Chad White Hospitality Group.

Joining White as a creative partner on the Arbor Crest project is his longtime friend and recent San Diego transplant, chef Hanis Cavin.

"We worked together quite a bit in San Diego, and he has been a friend of mine for many years," White says. "He was looking for a change of pace... this was a perfect opportunity and he has been involved with [the Arbor Crest project] every step of the way since we started."

White's partnership with the established local winery, founded in 1982, first began last summer when he did a pop-up dinner there serving food from High Tide. White and winery general manager Enevold are also old friends and former high school classmates, which also helped establish the relationship.

"This location is one of the most beautiful in all of Spokane, and sitting outside on the lawn eating Mediterranean food, you almost feel like you're in Tuscany," White says. "I was more than excited to partner with them to bring that element to this already amazing venue."

So far, response to White's menu has been overwhelmingly positive, even as the winery has seen fewer guests through its doors this summer season due to the pandemic.

"I would say any time we launch something new our guests are excited," Enevold says. "I think launching something new during such a challenging period provided an extra level of excitement."

"The menu, in my opinion," White adds, "has probably been the best fit menu for Spokane that I have done yet, besides barbecue, because we took a basic knowledge of what is available here in the Northwest and what flavors are coming from the Mediterranean and how can we make this approachable for everyone."

Seasonally, White plans for the menu to change based on regionally available ingredients and the annual flux in winery guests.

"During the fall and winter months we're going to have more hearty dishes, keeping people warm and comforted, but once again trying to stay as true to as much local [ingredients] as possible," he says.

White's contributions to the Arbor Crest experience won't end with the newly introduced menu and updates as the seasons change. He says future plans involve a continued collaboration to improve the winery's culinary offerings to complement both its award-winning wines and hospitality as a popular venue for public and private events.

"We'll call it a three-year plan to take things from where it was to how we're going to move into concerts and to offering a unique experience for tastings in the barrel room," White says. "And moving into the possibility of taking over catering down the road, keeping those things in-house and really expanding upon the flavor of what Arbor Crest is." ♦

The original print version of this article was headlined "Mediterranean Mood"

Speaking of The Road Back , Wine